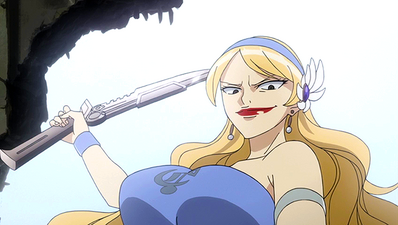 Coordinator (コーディネーター Kōdinētā) is a member of Carbuncle, who appears in Fairy Tail: Phoenix Priestess.

Speed: Massively Hypersonic+ (Kept up with X791 Base Erza)

Requip(換装 Kansō): Coordinator makes use of Requip to change her armors and weapons in battle. Coordinator has proven herself to be a very skilled user of this Magic; she is able to chain different requips on short periods of time.

Dispel (解除魔法ディスペル Disuperu): Coordinator is able to dispel certain forms of Magic, such as Elfman and Mirajane's Take Overs and Erza's requipped armors, but she can't do it if the target has a certain amount of will against it.

Dispel
Add a photo to this gallery

Retractable Blade: Coordinator's main weapon, outside of her armors, is a retractable blade. It has a long handle with a groove running along it and several circular sections where the handle connects to the blade casing. The handle is at a slight angle to the blade. When not in use, the retracted blade is housed in two covers, the lower, larger one over the upper one, both with an angled front. When the blade is brought into use, the lower cover flips forwards and upwards, and the blade extends forward through it. On the underside of the stationary portion of the blade, near the handle, there is a set of notches.

Scythe Armor: This elaborate armor is primarily gold with red clothing underneath. The upper half of the armor consists of a breastplate open at the middle, gauntlets with sharp claw-like fingers and pauldrons, the right one with wing-like decorations. The lower part of the armor consists of faulds and leg armor, each with a large wing, with a red, white and black eye pattern on it, and talon-like feet. Underneath the armor, Coordinator wears gloves and a bodysuit, starting at upper chest level, with a circle cut out around her lower chest. She also wears a blue headband or a winged helmet. While wearing this armor, Coordinator wields a large scythe.

Scythe Armor
Add a photo to this gallery

Multi-Sword Armor: This armor is blue with red trimming. It consists of a breastplate, shoulder guards, gauntlets and a series of plates, arranged like petals, over a large flower-like skirt. Coordinator's hair is tied in a ponytail with a white hair tie with petal-like decorations.

Multi-Sword Armor
Add a photo to this gallery

Fire Armor: This armor is red with gold trimming. It consists of a chest plate, styled like a leathery wing, covering the upper chest, dark-colored pauldrons, gauntlets and large, decorated faulds. Coordinator's hair is tied into a pair of high ringlets. While wearing this armor, Coordinator wields a large, jagged red blade, darker on the edges.

Fire Armor
Add a photo to this gallery

Melee Armor: This armor is primarily purple with white clothing underneath. The armor mainly consists of a breastplate which is open in the middle, pair of gauntlets, an open white skirt with purple trimming, a gray belt with a brown buckle, and leg armor. Underneath the armor, Coordinator wears a white band around her upper chest with her guild's emblem on it and white leggings. She also wears a white headband with a pair of wing-like decorations.

Melee Armor
Add a photo to this gallery

Retrieved from "https://vsbattles.fandom.com/wiki/Coordinator_(Fairy_Tail)?oldid=6321090"
Community content is available under CC-BY-SA unless otherwise noted.