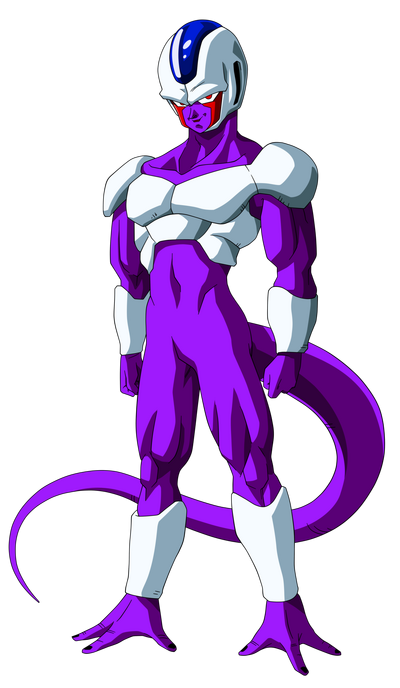 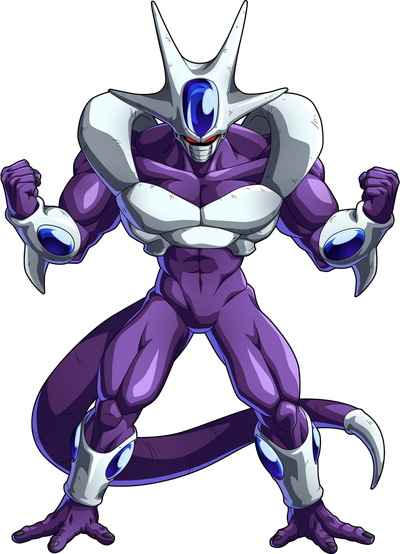 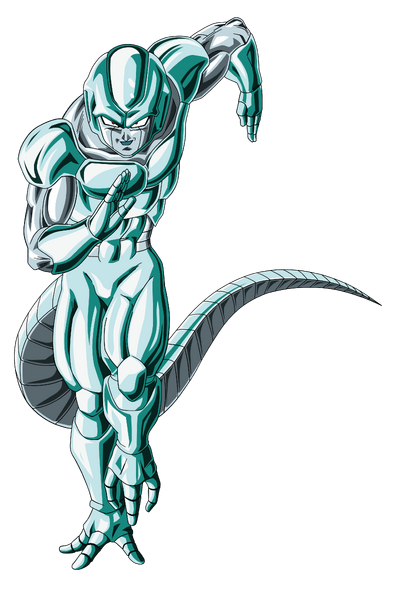 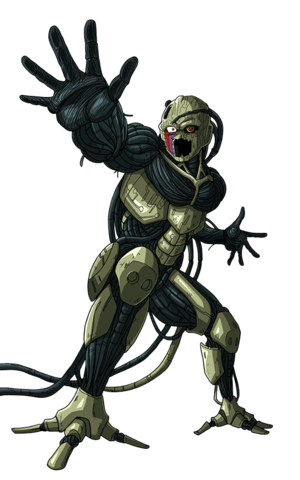 Cooler is the eldest son of King Cold and the older brother of Frieza. Having not been born with the same extreme power of his younger brother, Cooler developed an intense sibling rivalry with him, training and ultimately discovering a new transformation with the sole purpose of surpassing and defeating him.

Powers and Abilities: Skilled Martial Artist, Superhuman Physical Characteristics, Self-Sustenance (Type 1), Flight, Spaceflight, Acrobatics, Accelerated Development (Training; Physical Stats, Abilities), Ki Manipulation (Can be used defensively and offensively, to strengthen his skin or to fire ki blasts, which can home in on targets, and form defensive barriers), Shockwaves Generation, Telekinesis, Body Control (Can alter his body structure to create lower forms that restrict his power), Immortality (Type 2) (Just like his brother, Frieza, Cooler should be capable of surviving things such as being cut in half, though he cannot regenerate and is left helpless when wounded more extensively), Transformation (Can transform into his "Super Evolution" to greatly boost his abilities), Resistance to Extreme Cold and Cosmic Radiations | All previous abilities, Inorganic Physiology (Type 2), Self-Sustenance (Types 1, 2, and 3), Information Analysis, Teleportation, BFR, Dimensional Travel, Reactive Evolution (Whenever he repairs his body, the Big Gete Star quickly analyzes him and makes it so that the ability used to harm or destroy him the last time will not work anymore, as well as greatly heightens his power so he can respond better to physical damage), Regeneration (High-Mid; He was beginning to repair after being blown apart by Goku and Vegeta) | His first key's abilities, Cyborgization (Full), Technology Manipulation, Cloning, Energy / Ki Absorption in his core, Large Size (Type 0), Telepathy | His first key's abilities, in addition to Self-Sustenance (Types 1, 2, and 3) and Regeneration (Mid-High; can regenerate from Destron Gas)

Standard Equipment: None notable | The Big Gete Star and other Meta-Coolers

Intelligence: Compared to his younger brother, Cooler is an incredibly skilled martial artist with extensive self-training, training and skills that allow him to match the likes of Goku and Vegeta in hand-to-hand combat, even overwhelming them at times when combined with his superior abilities. While he remains boastful and arrogant, he is much more pragmatic without being any less cruel, refusing to accept that any opponent is dead until he has found their body, acting quickly to destroy the planet when outmatched, and having no issues with attacking distracted and incapacitated foes.

Weaknesses: Cooler is boastful and arrogant, not unlike his brother. | Meta-Cooler is left vulnerable while regenerating and his absorption abilities can be overloaded, causing the destruction of the Metal-Cooler Corps. | If the Destron Gas Machine is destroyed, he will be permanently defeated

Ki: The fighting power and life force of a martial artist, a tangible energy derived from the user's vigor, courage, and mind. It can be used in a number of ways, such as to surpass the limits of one's body to greatly increase in strength, and it can be fired as blasts of energy or used to create defensive barriers. While he may lack his younger brother's raw power, Cooler has much greater control over his ki thanks to his lower power and his own training, allowing him to hide his power level to sneak up on opponents and rapidly gather ki for his own attacks.

Mutant Hybrid Physiology: The first son of King Cold, Cooler has inherited his mutant, hybridized genes, but was not born with the same scale of abnormal, absolute power that his younger brother was, causing him to be passed over. This means that, as opposed to his brother, he can stay in his true form indefinitely without fear of losing control of his power, something that has been aided by his own training, causing him to master the form. As a result of his lower power, he seems to lack Frieza's absurd survivability, though his brain managed to survive his defeat at the hands of Goku intact and functional enough for him to be resuscitated by the Big Gete Star.

Big Gete Star: After his defeat and supposed death at the hands of Goku, what remained of Cooler drifted through space, coming into contact with the Big Gete Star, an artificial intelligence controlling a mass of technology that fused with him and renewed his consciousness, returning him to life. The Big Gete Star manufactured him a new body, his core, and Cooler used it to produce himself an army of robotic clones - the Meta-Cooler Corps. In his true form, Cooler can control the technology of the Big Gete Star and use it to absorb the energy of opponents, using it to empower himself and his many clones.