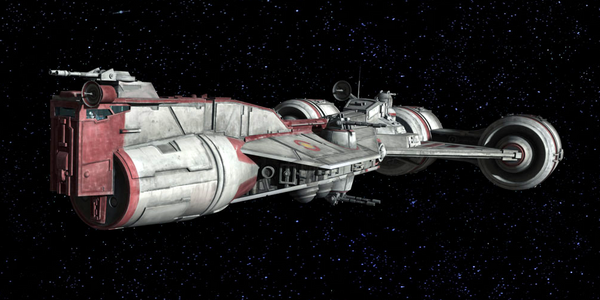 The Consular-class cruiser was a medium-sized ship manufactured by the famous Corellian Engineering Corporation for the Galactic Republic. The republic used them to transport diplomats and Jedi to troubled regions. After the outbreak of the Clone Wars in 22 BBY, Corellian Engineering began manufacturing heavily modified combat-oriented Consulars for the Republic Navy at the behest of Supreme Chancellor Palpatine. Known as the “Charger c70” retrofit, this variant had battleship grade armor plating, more powerful engines, more powerful deflector shielding, and some armaments. It was designed to act as a convoy escort and take on incoming small attack craft and was also used as a personal transport by high ranking officers and Jedi Generals of the Grand Army of the Republic. Some further modified Charger c70s were used as medical frigates alongside the Pelta-class. During the Galactic Civil War, a good number of heavily modified Consulars and Charger c70s were in use by the Alliance to Restore the Republic.

Tier: Likely Low 7-B with laser cannons. High 7-A with turbolasers

Needed prerequisite for use: At least 2 to 8 trained pilots and gunners (This is besides its complement of up to 30 additional naval personnel and troops)

Attack Potency: Likely Small City level+ with laser cannons (Capital ship class point defence laser cannons. Yields per shot likely in the range of a few Megatons). Large Mountain level+ with turbolasers (Shots on the highest power setting can blast through the unshielded hulls of capital ships with this kind of durability. Likely in the same league as the turbolasers of the Arquitens-class Light Cruiser)

Speed: Subsonic+ atmospheric speeds (900+ km/hr). Can accelerate continuously to Sub-Relativistic+ speeds in space (At least as fast as the CR90 and Arquitens-class Light Cruiser). Massively FTL+ travel via hyperspace (Equipped with a Class 2 hyperdrive. Should thus be this fast)

Durability: City level without deflector shields (Can take a few hits from the heavy point defence laser cannons of capital ships before going down. Should be about as durable as the CR90 Corvette). At least Large Mountain level+ with deflector shields (Can take multiple hits from the turbolasers of a Munificent-class Star Frigate and Recusant-class Light Destroyer before depleting)

Range: Dozens to hundreds of kilometres with its armaments

Weaknesses: Not too well armed relative to size and overall not really suitable for operations against enemy capital ships. Limited number of escape pods relative to size.

Note: This profile covers only the Charger c70 variant of the Consular-class.

Retrieved from "https://vsbattles.fandom.com/wiki/Consular-class_Cruiser?oldid=6371721"
Community content is available under CC-BY-SA unless otherwise noted.