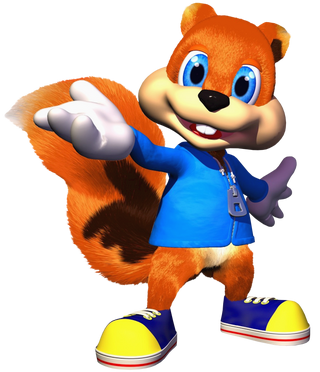 Conker the Squirrel is the main protagonist of the titular video game series created by Rareware. He is a red squirrel with a working-class English accent, who is foul-mouthed and alcoholic, but still good-hearted, and tends to get into a lot of trouble.

Powers and Abilities: Superhuman Physical Characteristics, Flight (By spinning his tail), Toon Force, Hammerspace, Weapon Mastery, Breaking the Fourth Wall, Resurrection (has "as many lives as he thinks he can get away with"), Immortality (Type 4), Limited Transformation (Can turn into an anvil), Hypnosis, Fire Manipulation (Via flamethrower), Explosion Manipulation (Via rocket launcher and dynamite)

Attack Potency: At least Small Building level (Staggered a large stone gargoyle, comparable to enemies who can damage him)

Speed: Hypersonic+ (Reacted to an ICMB, can casually dodge bullets)

Lifting Strength: Class 1 (Can push boulders around and throw a beehive larger than himself several meters in the air)

Durability: At least Small Building level (Survived hitting a windmill hard enough to smash it into bits. Took a tank explosion that knocked out Private Rodent, the likes of which survived the destruction of a military bunker)

Intelligence: Above Average (A master of persuasion and multiple weapons. Is very cunning like when he convinced a guard that he is not a squirrel, but rather an elephant)

Start a Discussion Discussions about Conker the Squirrel