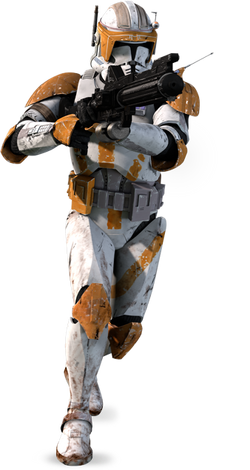 CC-2224, also known as Cody, was a Clone Trooper Marshall Commander in the Grand Army of the Republic. He served under and developed a good bond with Jedi General Obi-Wan Kenobi. He also has worked and developed close friendships with Anakin Skywalker and Captain Rex. Unlike Rex, who saw through the plot against the Jedi and removed his inhibitor chip, Cody was made to obey Order 66 due to still having his inside his brain and ordered an AT-TE of the 212th Battalion to fire on Kenobi.

In the Disney continuity, it is unknown what became of Cody after the end of the Clone Wars. In the Legends continuity, Cody would go on to become an instructor at an imperial academy. However, he would become disillusioned and very bitter with the normal human Stormtrooper recruits and viewed them as vastly inferior to the Fett clones such as himself. His bitter attitude resulted in the Stormtroopers under him suffering from poor morale - a stark contrast to his time in the Grand Army of the Republic where Cody was a no-nonsense but still inspirational leader to the men under him.

Tier: 9-B physically, 9-A with blasters, High 8-C with heavy weapons and explosives

Age: 13 chronologically during the Clone Wars (late 20s to early 30s biologically due to accelerated aging)

Attack Potency: Wall level physically (Should be comparable to or only slightly weaker than the ARC Trooper programme trained Rex), Small Building level with blasters (His DC-17 heavy blaster pistol packs such firepower as do the DC-15 series blaster rifles), Large Building level+ with heavy weapons and explosives (Makes regular use of the Class-A Thermal Detonator and also the RPS-6 rocket launcher which is even more powerful)

Speed: Peak Human with Supersonic combat speed and reactions (Can dodge blaster fire). Likely Subsonic+ flight speed with jetpack (Can keep up with transport shuttles and slower starfighters, which tend to have top atmospheric speeds in the range of 800+ km/hr at least)

Striking Strength: Wall Class (Should be comparable to or only slightly weaker than Rex)

Durability: Wall level without armor, Wall level with armor against physical strikes (Phase I ARC Trooper armor served as the basis for the The Phase II Clone Trooper armor which Cody wears) and Small Building level against blasters (Armor plating made of a material which can disperse the energy of at least one or more blaster bolt hits which can result in the wearer being in pain but otherwise fine)

Standard Equipment: During the Clone Wars, Cody used a set of Phase I ARC trooper armor, which featured a visor, an antenna on his helmet, and an antenna on his shoulder, an infrared scanner, and orange stripes, which was a color used by many of the other members of the 212th. Cody often brandished the standard DC-15 Blaster Rifle, as well as the DC-15A. He had lamps on his helmet at Geonosis. Later, when Phase II clone trooper armor was created, Cody wore a similar set but had a few changes. The changes were; two gray stripes coming down the sides of the top of his helmet, a small tool attached to the upper arm piece, one antenna on the shoulder pads with one on the back of his helmet, and a smaller, oval-shaped jetpack. This also featured a visor and orange markings.

Intelligence: Gifted. Cody is a highly skilled and dangerous combatant. He is also a capable strategist, tactician, and a leader who can complete missions by making most of the men and resources at his disposal (more so than even the likes of Rex). Furthermore, he and Rex created much of the protocols used in various fields by the Grand Army of the Republic - protocols so effective that the imperial military still used them two decades later.

Retrieved from "https://vsbattles.fandom.com/wiki/Commander_Cody?oldid=6039059"
Community content is available under CC-BY-SA unless otherwise noted.