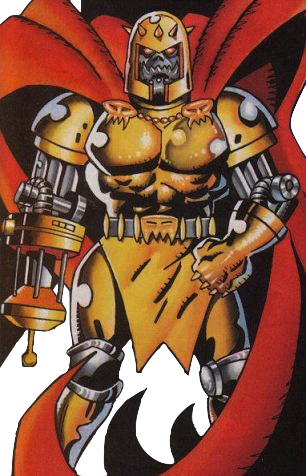 Commander Brutus was a robot created by Dr. Robotnik with the intention of creating a robot incapable of making mistakes, so Robotnik made a copy of his brain waves and built the robot around his own design.

However, Brutus longed for power himself and tried to overthrow Robotnik and seize his empire, only to get destroyed by the doctor himself.

Age: A year old at the time of destruction

Attack Potency: At least City level+ (Sonic posed no match to him until he turned into Super Sonic)

Durability: At least City level+ (Took no damage from any blow dealt by Base Sonic. Survived blows from Super Sonic, albeit barely)

Intelligence: Genius intellect (His robots were far deadlier than Robotnik's, and he should be as smart as him due to having the exact same brain pattern)

Weaknesses: Very weak to extremely cold temperatures (He easily brittled when Robotnik froze him) and electricity (he was defeated when Sonic knocked him into Plasma)

Start a Discussion Discussions about Commander Brutus (Sonic: The Comic)