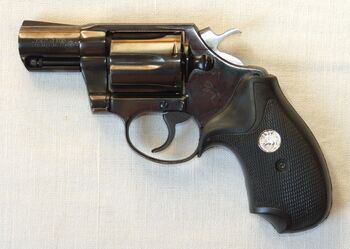 The Colt Detective Special is a six-shot, carbon steel framed, 2" barreled, double-action revolver, and the first example of a class of firearms known to gun enthusiasts as "snubnosed revolvers". Made by Colt's Manufacturing Company this model revolver, as the name "Detective Special" suggests, was intended to be concealed weapon used by plainclothes police detectives.

Introduced in 1927, the Detective Special was the first short-barreled revolver produced with a modern swing-out frame. It was designed from the outset to be chambered for higher-powered cartridges such as the .38 Special, considered to be a powerful caliber for a concealable pocket revolver of the day. The Detective Special uses a slightly smaller frame than the Colt Official Police or Smith & Wesson Model 10 (K-Frame) revolvers, but is larger than the five-shot Smith & Wesson Model 36/Model 38/Model 42 (J-frame) revolvers.

Wielders: Many police departments as well as law enforcement units and armies (in the past); Myanmar Police Force and some other countries nowadays

Range: Comparable to Colt Python, whose maximum firing range is over 200 yards or 182.88 meters

Note: It had been used by The Joker (Arthur Fleck) in his own movie.

Retrieved from "https://vsbattles.fandom.com/wiki/Colt_Detective_Special?oldid=6375317"
Community content is available under CC-BY-SA unless otherwise noted.