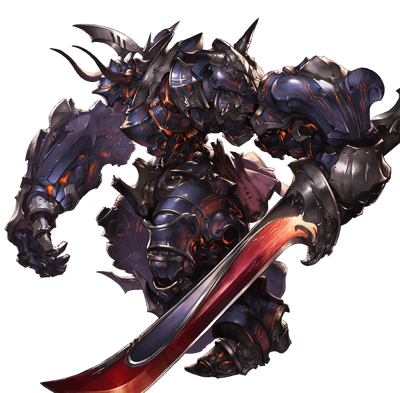 Colossus is a summon and a boss in Granblue Fantasy. The great steel has grown larger still. The heat from its giant frame consumes envy, longing, and all else.

Superhuman Physical Characteristics, Berserk Mode, Weapon Mastery, Inorganic Physiology (Type 2), Immortality (Type 1, 2, 3, 4 and 5, 8 in its true form), Magma Manipulation (Can cause magma to erupt from the ground with Ground Shatter), Aura, Damage Boost (Capable of increasing damage of any fire attacks), Statistics Reduction (Capable of reducing defense), Fire Manipulation, Statistics Amplification (Can amplify its strength by Force Field), Damage Reduction (Capable of cutting damage with Force Field), Heat Manipulation (Capable of creating intense heat just by mere contact), Limited Light Manipulation (Its body is so hot that it leaves red trails in the air), Summoning (Can summon monsters), Non-Corporeal and Abstract Existence in its true form (Type 1; Primals, in their true forms, are abstract without any kind of form, representing their elements or abstractions), Regeneration (Mid-Godly; Primals are capable of regenerating after being reduced to their concept), Resurrection (Primals can resurrect themselves, though this takes extremely long amount of time thus it's not combat applicable), Resistance to Heat Manipulation (Capable of easily surviving intense heat from magma and flames)

Speed: Massively Hypersonic+ (Primals are able to react and dodge electricity, comparable to the likes of Vaseraga) | Sub-Relativistic (Comparable to Baal and Medusa)

Lifting Strength: Class K (With sheer size, it should be this heavy) | At least Class K (Way stronger than before)

Intelligence: Unknown (Was built few moments before it was destroyed but already has conscience and understanding enough to save a person)

Weaknesses: Weak to Water based attacks. It can't use her special attacks when Overdrive is broken. It being abstract is only applicable when it's power is drained completely, and this is downside than anything else, as Primals in their abstract forms are completely powerless.

Retrieved from "https://vsbattles.fandom.com/wiki/Colossus_(Granblue_Fantasy)?oldid=5149750"
Community content is available under CC-BY-SA unless otherwise noted.