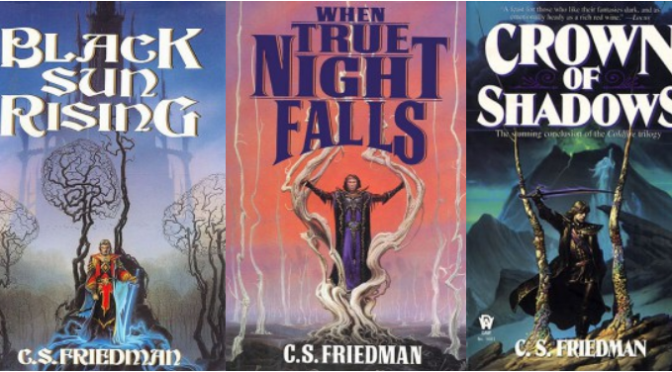 The Coldfire Trilogy is a series of novels by Celia S. Friedman, consisting of Black Sun Rising (1991), When True Night Falls (1993) and Crown of Shadows (1995). The series takes place on the planet Erna, and follows the story of Damien Kilcannon Vryce, a warrior-sorcerer of the Church, and Gerald Tarrant, a powerful sorcerer and vampire-like undead, as they become involved in, investigate and attempt to stop a plot to corrupt the souls of humanity.

Overall, the verse is not that strong in terms of AP. The majority of characters range between Street level and Small Building level, with there being some non-combat applicable feats being far higher. However, the verse does have many good powers, including Mind Manipulation, Soul Manipulation, Biological Manipulation, Absorption, Regeneration, Life Manipulation, Death Manipulation, Clairvoyance, Precognition, Illusion Creation and more.

Fae: Fae is an sort of energy field that permeates the planet Erna. Fae responds to the consciousnesses of those around it, and when controlled can be used to cast a variety of semi-magical abilities. When uncontrolled, it can result in fears and doubts being manifested, resulting in machinery failing as long as there is the tiniest bit of doubt it might fail, or creating physical bodies for creatures of legend such as vampires. Fae is Worked to cast several "spells" by sorcerers.