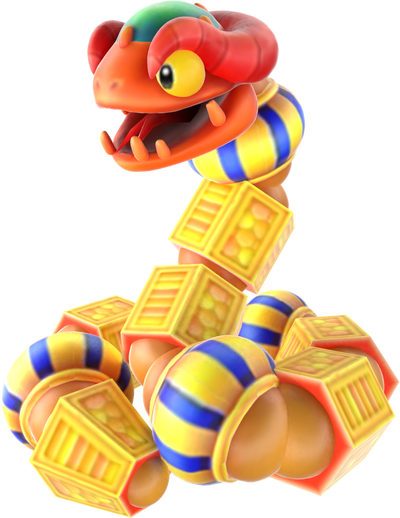 Coily Rattler is a boss in Kirby: Triple Deluxe that is fought in Wild World.

This statuesque snake was once seen by the People of the Sky as a symbol of peace. However, it's since been corrupted by an evil magic and has become a scourge on the land. Its weak spot is its head.

Age: Unknown. Revered since "the dawn of time", which is likely to be an exaggeration to an unknown degree

Powers and Abilities: Superhuman Physical Characteristics, Inorganic Physiology (Type 1), Longevity, Body Control (He can separate the 12 parts of his body and reassemble them again for offensive purposes), Regeneration (High-Mid. Losing half of his health causes his body to be blown into pieces, which happens due to the damage it got instead of being something he generates on purpose; Can quickly reassemble its body from that), Immortality (Type 2 & 3), Can fire volcanic rocks, Can be only damaged in his head, Fire Manipulation, Electricity Manipulation

Attack Potency: Large Planet level (As a boss, he is stronger than minor enemies like Knuckle Joe, who is able to crack planet Popstar, and Schwarzs, who can create black holes)

Speed: FTL (Comparable to Kracko and other bosses who are above Knuckle Joe) 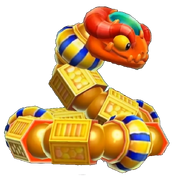