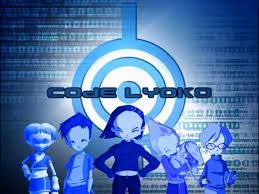 Code Lyoko is a French animated television series created by Thomas Romain and Tania Palumbo and produced by Moonscoop. The series centers on a group of six teenagers who travel to the virtual world of Lyoko to battle against a malignant artificial intelligence named X.A.N.A. who threatens Earth.

The characters themselves are not too strong, but not too weak. While normal humans in the series are just that, normal humans, they have survived some suspiciously lethal falls and shrugged off blunt force trauma from time to time, putting them in a similar vein to Avatar Characters in real life. In the virtual world, their durability and striking strength feats are building level (surviving attacks from a Megatank which can bring down large building-sized towers, Ulrich several times parrying these attacks, albeit with great both are with great strain.) They have a superhuman movement speed, with Ulrich being potentially supersonic via super sprint. That being said, however, their reactions times are far higher due to reacting to lasers and often blocking parrying, or even shooting lasers out of the air, giving them Relativistic+ reacts and combat speed.

The true power of this verse comes in the form of the powerful A.I. called X.A.N.A., who is capable of easily hacking and taking over the most powerful and advanced devices in the world, even hacking nearly every supercomputer in the world and has effortlessly taken control of any and every device it has come into contact with, and is also capable of possession of any living human or animal that has not been to Lyoko and even animals that haven't been to Lyoko, giving the possessed victim superhuman abilities of varying types, but always having intangibility, greatly enhanced physical abilities, and energy manipulation of various kinds (usually electricity-based). While XANA's power varies, it/he/she (unclear) is at least city-level via taking over nuclear plants. Franz Hopper and the Scyphozoa capable of most of these powers as well, but to a lesser degree than the AI.