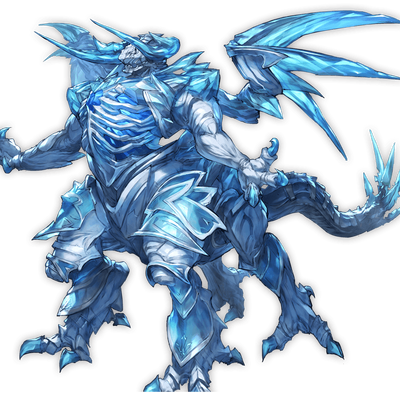 Cocytus is the boss in Cocytus Showdown and Xeno Cocytus Clash.

Age: More than thousands of years

Superhuman Physical Characteristics, Expert Hand-to-hand Combatant, Immortality (1, 2, 3, 4 and 5, 8 in his true form), Non-Corporeal and Abstract Existence in his true form (Type 1; Primals, in their true forms, are abstract without any kind of form, representing their elements or abstractions), Regeneration (Mid-Godly; Primals are capable of regenerating after being reduced to their concept), Resurrection (Primals can resurrect themselves, though this takes extremely long amount of time thus it's not combat applicable), Summoning (Primals can summon monsters), Aura, Water Manipulation, Ice Manipulation, Damage Boost, Statistics Amplification, Perception Manipulation (Can make someone blind), Curse Manipulation (Can curse someone to take damage with Antenor), Power Nullification (Can seal abilities and nullify buffs and debuffs with Tromea), Weather Manipulation (Capable of creating blizzards) and Sound Manipulation (Capable of silencing anything)

Attack Potency: Multi-Continent level (Was going to freeze the entire world if he wasn't stopped in the showdown and comparable to Ifrit) | At least Multi-Continent level, possibly Planet level (Capable of freezing the entire world in absolute zero temperatures and possibly comparable to Fenrir who fought the crew just before they fight Rose Queen and Yggdrasil Malice)

Stamina: Extremely High as most Primals can continuously use their powers for years.

Intelligence: Unknown. Primals are really good at combat and extremely old but doesn't know much about the world.

Weaknesses: Weak to Earth based attacks. She can't use his special attacks when Overdrive is broken. Him being abstract is only applicable when his power is drained completely, and this is downside than anything else, as Primals in their abstract forms are completely powerless.

Retrieved from "https://vsbattles.fandom.com/wiki/Cocytus_(Granblue_Fantasy)?oldid=5166404"
Community content is available under CC-BY-SA unless otherwise noted.