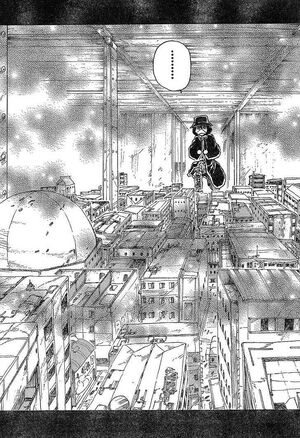 An experiment by Fran caused cockroaches to adapt and mentally evolve at immense speed, learning to write and even build cities in weeks.

After some time, they are forced to agree to a treaty limiting their reproduction and expansion, causing them to get bored of life, and distract themselves by setting up things like superhero stories in the real world.

Tier: 10-C, possibly 10-B with weapons and super-roaches

Territory: A single room, likely about 20 m^3 of territory.

Attack Potency: Below Average Human for individual roaches (Not more powerful than normal cockroaches, tough far more flexible), possibly Human level with weapons (created miniature versions of weaponry that should be comparable to humans, since they can make large explosions) and super-roaches (Superheroes superior to their weaponry)

Industrial Capacity: Extremely fast, destroy and rebuild their cities on a daily basis

Military Prowess: Likely in the hundreds of soldiers, unknown number of weaponry

Weaknesses: They are completely cut off from the outside world, and willingly cause comic-like superhero stories to happen in real life for entertainment, regardless of the mass deaths it causes. They have a treaty to not expand in numbers or territory with Fran, and the latter would kill them were they to break the treaty.

Retrieved from "https://vsbattles.fandom.com/wiki/Cockroach_Civilization_(Franken_Fran)?oldid=6096897"
Community content is available under CC-BY-SA unless otherwise noted.