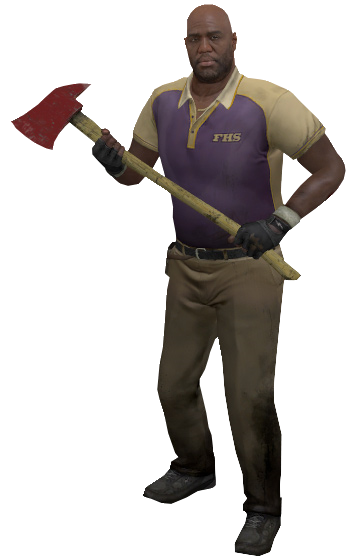 The Coach is the eldest, voice of reason and authority of the team of Left 4 Dead 2, playing a role similar to Bill. He appears as a warm figure as a father with an optimistic attitude that is hard to disagree with. Despite his friendly attitude, his experience as a real coach causes him to demand things from other survivors. The coach can be considered to be a parental figure, and leader alongside Ellis.

Tier: 9-C by himself. 9-C to 9-B with firearms and grenade launcher.

Name: Unknown. Everyone calls him Coach, his real name has never been revealed.

Powers and Abilities: Superhuman Physical Characteristics, Survivalism, Firearms and melee weapons proficiency, Statistics Amplification, Healing, Can struck targets with fire, Explosion Manipulation, Resurrection, Brutal Chainsaw Wielder, Limited Resistance to Disease Manipulation (Being carriers of the infection, the survivors are complete immune to the Zombie Virus. However, they are an extremely danger to any human they find that are not immune to the virus, since they can transmit the virus to others)

Striking Strength: Street Class (Comparable to the other survivors)

Durability: Wall level (Can withstand various hand-to-hand attacks of zombies and the Tank, who can break metal doors and walls easily. Comparable to the other survivors)

Stamina: Superhuman (Can fight with thousands of zombies in several days without any retreat, Comparable to the other survivors)