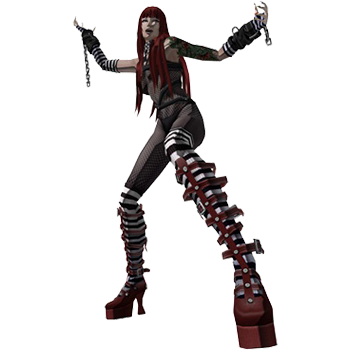 Cloe Walsh is the 23rd Ranked Assassin in "No More Heroes 2: Desperate Struggle". A prisoner under maximum security inside an abandoned prison, she is one of the weirder assassins of the series. Especially with the ability to spit acid and high pitch screams from her mouth. She is rather seductive yet sadistic, flirting with Travis saying he would look more "Dashing" if he was writhing in agony. She also seems to have a certain effect on the body since Travis stated that he couldn't move as soon as Cloe wrapped her arms on his shoulder and that he only escaped because his beam katana suddenly turned on and stabbed her in the stomach. However, she was only fazed​ for a few seconds. She also has a European accent.

Speed: Massively Hypersonic+ (Can keep up with most of Travis's movement and shouldn't far below MacDonald)

Range: Standard melee range; several meters with poison and Sonic Screech (Though people can hear her screaming far away from the prison)

Retrieved from "https://vsbattles.fandom.com/wiki/Cloe_Walsh?oldid=4777405"
Community content is available under CC-BY-SA unless otherwise noted.