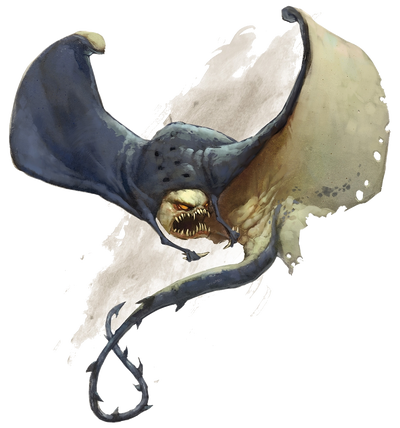 Cloakers are a species of animals akin visually to manta rays with demonic faces. These creatures lark in darkness, disguising themselves by folding up, waiting for lone prey to wander by. They are known for their communication method- that is to say, low-frequency moans that cause terror in those who hear it.

Powers and Abilities: Superhuman Physical Characteristics, Flight, Large Size (Type 0), Sound Manipulation, Fear Manipulation/Empathic Manipulation (It's moans function on frequencies it can change at will, causing feelings of doom and despair), Enhanced Senses, Paralysis Inducement (With Stupor, its groans can even cause beings to be locked in place for some time), Illusion Creation, Duplication (With Phantasms, a Cloaker can generate three replicates of itself, all illusory though made to move in such a way that tracking the original is impossible even for those possessing enhanced senses), Darkness Manipulation via Shadow Shift (Can bend shadows to its will, creating shadowy illusions or blinding enemies with magical darkness that nightvision cannot pierce), Non-Physical Interaction (Can affect abstract, intangible, incorporeal, conceptual, and nonexistent creatures)

Stamina: Superhuman, can lie in wait for hostiles for extended periods of times and can compare to adventurers

Intelligence: Above Average, though they are animalistic, Cloakers are rated as being superior to typical humans, and can organize meetings to discuss complex hunting patterns and new threats

Retrieved from "https://vsbattles.fandom.com/wiki/Cloaker?oldid=5816428"
Community content is available under CC-BY-SA unless otherwise noted.