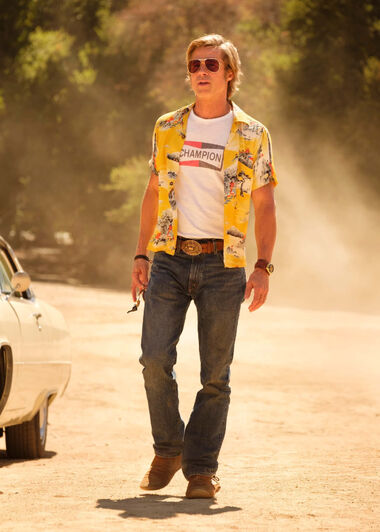 Cliff Booth is the stunt double and best friend of actor Rick Dalton in 1969 who lives alone in a trailer park with his dog Brandy. He is alleged to have possibly killed his abusive wife on a boat.

Origin: Once Upon a Time in Hollywood

Attack Potency: Street level (Slammed Bruce Lee hard enough to dent a car door, brutally overpowered Sadie and Katie despite being severely intoxicated. It was stated that he could kill someone with a spoon, paper or business card)

Speed: Athletic Human (Is a green beret and WWII veteran)

Durability: Street level (Survived getting shot and stabbed while inebriated. It was stated that he could survive getting set on fire)

Retrieved from "https://vsbattles.fandom.com/wiki/Cliff_Booth?oldid=5833473"
Community content is available under CC-BY-SA unless otherwise noted.