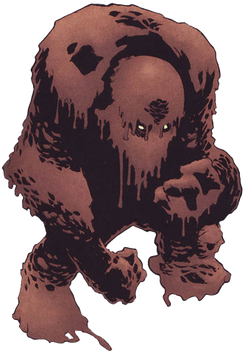 Originally an actor who went on a killing spree after going mad, Basil Karlo would eventually manipulate and take the powers of all of the other villains to use the moniker of Clayface, considering himself the Ultimate Clayface. However, he quickly lost control of these powers, eating a hole through the Earth, where he was trapped until the events of Cataclysm freed him.

Age: Unknown, possibly in his 60s if not older

Powers and Abilities: Superhuman Physical Characteristics, Body Control/Weapon Creation, Duplication (Can become a crowd of people), Regeneration (At least Mid-High, returned after being completely consumed by one of Poison Ivy's plants and regularly regenerated immediately after being blown apart or cut to pieces), Size Manipulation/Earth Manipulation/Absorption (Could manipulate the clay that made up Wonder Woman's body and absorb her powers through it and can get bigger or stronger by consuming other people or minerals, as well as get their properties), Durability Negation via poisonous touch, Resistance to Earth Manipulation (Geo-Force couldn't control his body) and possibly Pain Manipulation (Most attacks to his person don't seem to directly hurt him at all)

Attack Potency: At least Building level, possibly higher (Significantly stronger than Batman, and has taken on other heroes much stronger than him), poisonous touch bypasses durability

Speed: Massively Hypersonic combat speed (Can keep up with Batman and Stephanie Brown)

Lifting Strength: Class 10 to Class 25 (Can lift and throw trucks with ease, as well as projectiles weighing this much)

Range: Extended melee range due to size, higher via shapeshifting with weapons and projectiles

Intelligence: Above Average (A seasoned actor and criminal with decades of experience with an above-average level of combat skill)

Retrieved from "https://vsbattles.fandom.com/wiki/Clayface_(Post-Crisis)?oldid=5756471"
Community content is available under CC-BY-SA unless otherwise noted.