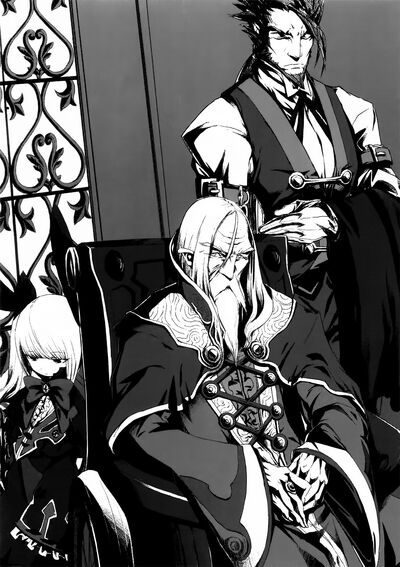 Clavis Alucard, also known as the No Life King was the previous head of the Alucard family, said to have lived for over a millennium. He appears briefly in BlazBlue: Phase Shiftnovels, and is a somewhat major character in the BlazBlue: Bloodedge Experience series. During his few appearances, he was shown to be humble, polite, and treated those around him with grace and dignity which, ironically, is almost the exact opposite of his daughter. According to Rachel and Valkenhayn, Clavis was never one to stand idly by and would intervene only when he believed it was a right thing to do.

Superhuman Physical Characteristics, Decent Hand-to-hand Combat Skills, Magic, Non-Physical Interaction (Observers can interact with True BlazBlue Ragna, Arakune and Terumi), Phenomena Intervention (Type 1; Capable of creating phenomena interventions, albeit it is quite weak compared to other Observers), Invulnerability (Is outside of reason, and thus immune to conventional weaponry), Telekinesis (was capable of opening a door with his thought), Life Manipulation (Can share his life with another person), Stealth Mastery, Blood Manipulation, Darkness Manipulation, Intangibility, Instinctive Reaction, Power Bestowal, Fear Aura, Healing, Body Control, Flight and Necromancy (Scaling from vampires like Raquel and Fuzzy), Transmutation (Turned enormous amount of people to seithr in order to create an Embryo), Acausality (Type 1), Sleep Manipulation (Put Kana to sleep with a spell), Time Stop, Soul Manipulation (Was in possession of Hihiirokane), Power Nullification, Death Manipulation and Regeneration Negation (Up to High-Godly with Hihiirokane; is capable of killing Terumi, who regenerated from Hakumen's Time Killer, which is superior to the cauldron's Existance erasure, which can erase someone from the past, present and future), Paralysis Inducement (His presence alone paralyzed Naoto), Regeneration (Mid-Godly; Stated that he can regenerate his own existence, even if he doesn't want to), Immortality (Type 3, 5, and 7, possibly 8), Self-Sustenance (Type 1, possibly 2 and 3), Statistics Amplification (Amplified wood's strength to seal Terumi), Clairvoyance (Knows the future as seen in his conversation with Ragna), Forcefield Creation and Attack Reflection (Likely was in possession of Tsukuyomi Unit), Possible Non-Corporeal and Abstract Existence (Type 1; Stated by him that his existence is a Drive and is called Illusionary Creature, created when a human touched Azure, born from desires and greed of humanity. Izanami, who has similar description to his existence, is a non-corporeal abstract embodiment of what she represents, that being death)

Attack Potency: Large Planet level (Is stated to be so strong that he threatens the world's order with his very existence. Easily defeated Valkenhayn and Relius. Even Spinner needed prep to defeat him. Killed Naoto in Blazblue timeline)

Speed: At least FTL (Easily reacted to Relius and Valkenhayn)

Durability: Large Planet level (Took hits from Valkenhayn and Relius and only suffered a single tiny wound on his hand). Multiverse level+ with Tsukuyomi Unit (Even Amaterasu can't scratch it)

Stamina: Extremely High. Isn't going to tire even if Naoto will going to absorb tens of thousands of amount of lives from him.

Range: Planetary (Transmutated enormous amount of people across the globe)

Intelligence: Extraordinary Genius. Gave Raquel an amount of knowledge 500,000,000 times more than that of an average human. Knows even the future and has wide knowledge around reason and Boundary.

Retrieved from "https://vsbattles.fandom.com/wiki/Clavis_Alucard?oldid=5882091"
Community content is available under CC-BY-SA unless otherwise noted.