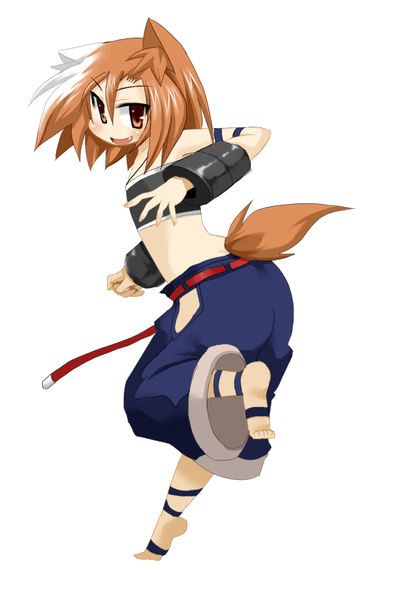 Claudette is a playable character in Wonderful World. She is the twin sister of Chartette, a girl from Lyptus. It is made to belong to the livestock troops of the magician Ardore. She is attached to the Shackles of Obedience, and if she goes against it she will suffer, so she can not defeat orders. She is optimistic and always acts as it is. She is planning to take care of her sister importantly, but she often swings around. She does not think too much about things, and her head is not so good. As soon as she talks about a difficult story, She screws up her little head.

Powers and Abilities: Superhuman Physical Characteristics, Wind Manipulation, Attack Improvement, Expert at Jujutsu, Dog Physiology, Expert precision (As shown in "Deadly Blow!" when only a 2-3/100 fps window is allowed for the move to be successful by timing HS.)

Range: Prefers Close Range Vicinities over anything else, Sonic Impact improves these Stats.

Standard Equipment: None, just Bracers, sportsbra, & Shorts with a belt hanging, though it does have the instantaneous force of a weapon.

Intelligence: High (Blackbelt level intelligence in combat; was forced to ADAPT after her sister was forced into abuse.)

Weaknesses: Hotheadded, Her Shackles of Obedience (They limit the energy obtained while fighting.), Brash, Electricity Manipulation (Something Duna can do.), Liz (Who hates anything Dog.), "Deadly Blow!" is nigh impossible to perfect, let alone use right most of the time...

Feats: Has the most damage inducing Finish Skill Healthwise, has clashed with many weapons users in equal level, she even protects her sister, Chartette in order for both to avoid Ardore.

Retrieved from "https://vsbattles.fandom.com/wiki/Claudette_(Wonderful_World)?oldid=4617749"
Community content is available under CC-BY-SA unless otherwise noted.