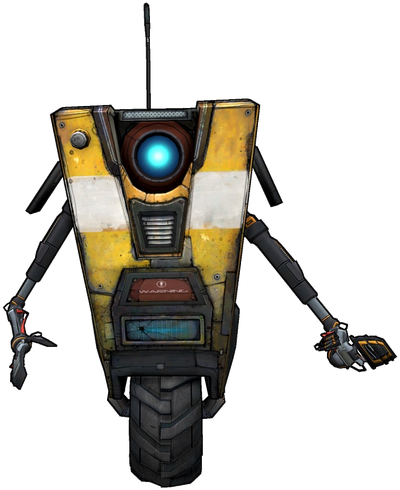 Claptrap is a CL4P-TP general purpose robot and the mascot of the Borderlands series. He started off as a normal robot that aids the Vault Hunters in their journey, a sudden radical shift in his programming led him to try to take over Pandora with his "Robolution". He is then reprogrammed to work for Handsome Jack, only for him to be left the last Claptrap unit after Jack used the H-Source to destroy every other unit out of annoyance.

Attack Potency: Large Town level (Should be comparable to Lilith)

Speed: Relativistic+ (Kept up with the sentinel who moved this fast)

Weaknesses: His VaultHunter.EXE skill requires a cooldown after it's used.