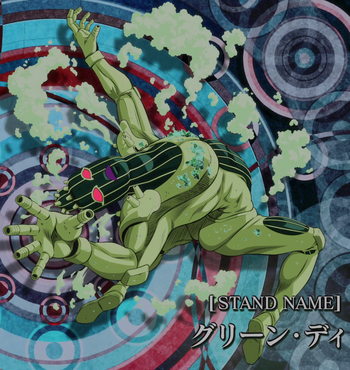 Cioccolata is a minor antagonist in JoJo's Bizarre Adventure Part V: Vento Aureo. A former doctor who was fired for "accidentally" killing a patient during surgery, he joins the Neopolitian Passione alongside his "pet", Secco, as one of the Boss' Guard Squad members. Due to his malevolent nature, he is rarely called upon, but the Boss had no other choice but to call him to fight Bruno Buccellati and his gang in Rome.

Powers and Abilities: Extrasensory Perception (Capable of seeing ghosts and souls among some other supernatural forces that are normally otherwise invisible), Aura, and Summoning (Of his Stand). Green Day is capable of Spreading a lethal mold depending on the range of corpses and level of elevation, Green Day can control the separated limbs of Cioccolata's and possibly others, Extrasensory Perception (Much like its user), Non-Corporeality (Stands are the incorporeal manifestations of one's vital energy, and can only be harmed by other Stands), Non-Physical Interaction (Stands can interact with ghosts and other Stands), Invisibility (Stands can only be seen by other Stands and Stand Users), Selective Intangibility, Aura

Speed: Peak Human with Massively FTL reactions (Reacted to and attacked Giorno with his severed arm before Gold Experience could attack him). Massively FTL with Green Day (Was the source of the speed that ambushed Giorno.)

Stamina: Peak Human (Was still alive and well after being shot in the head and amputating himself)

Range: Varies (It depends from how many corpses it creates)

Intelligence: High (High knowledge on human anatomy, and where to precisely cut to not strike any blood vessels or nerves; was said to ace all his classes and be very devious)

Weaknesses: Any damage done to Green Day will reflect back onto Cioccolata. The effects of Green Day will wear off if Cioccolata is incapacitated or killed. Green Day's mold cannot infect inanimate objects, dead objects or Stands (And presumably other non-organic entities). His sadistic tendencies can lead to him to ignore his surroundings and being able to get tricked.

Prosciutto & Pesci (JoJo's Bizarre Adventure) Prosciutto and Pesci's Profile (Note: Speed was Equalized, Both teams had two hours of preparation, Cioccolata was teaming up with Secco)

Ghiaccio (JoJo's Bizarre Adventure) Ghiaccio's Profile (Both had prior knowledge)