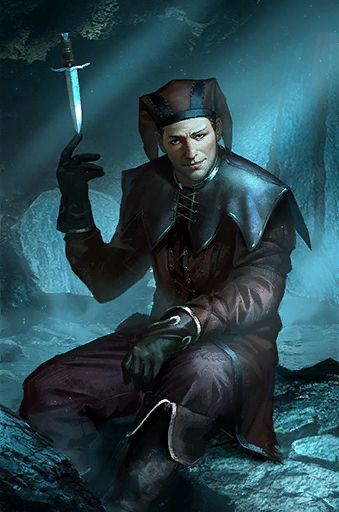 Cicero is an eccentric member of the Dark Brotherhood and the Keeper of the Night Mother's Coffin. If he is spared during the Dark Brotherhood questline in The Elder Scrolls V: Skyrim, he can be recruited as a follower by the Dovahkiin. As a member of the Dark Brotherhood, Cicero specialises in the silent kill, having quite the reputation for his cloak-and-dagger killing style, even before the events of Skyrim. Driven to insanity by isolation and obsession with trying to become the Night Mother's Listener, he started to mimic the behaviour of his last assassination contract, a jester. A persona he continues till date...

Age: Likely in his 30s (Was already a high-ranking member of the Brotherhood 12 years before the events of Skyrim)

Attack Potency: Large Building level (Defeated and grieviously injured Arnbjorn, an assassin and former Companion, and Veezara, a Shadowscale. Thus, he should be comparable to Aela), possibly higher (Arnbjorn is very willing to fight in werewolf form and Cicero defeated him, making him comparable to Aela)

Speed: At least Subsonic (Is a supremely talented assassin with high speed and mobility. Should be comparable to Redguards, who can dodge arrows)

Lifting Strength: Athletic Human (Is in peak physical condition as an assassin)

Durability: Large Building level, possibly higher (Can take hits from Arnbjorn who is comparable to Aela)

Stamina: Above average (As a skilled assassin, he likely spent a lot of time on the move. Even after sustaining injuries from the fight with Arnbjorn, he can still put up a commendable fight against the Dovahkiin)

Intelligence: Insane, but it doesn't hinder his fighting. Is intelligent enough to set up traps to keep intruders away.

Weaknesses: Insane and prone to violence. Psychotic and always on the look for a kill. His clothes provide no armour against physical or magical attacks.