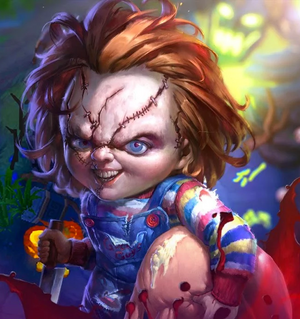 Chucky is playable killer doll from the game MOBA Legends. He has found his way to the arena for the sole propose of finding fresh victims to transfer his soul into. His role is classified as a melee tank.

Tier: 9-B physically, higher with abilities, Runes, and Equipment

Superhuman Physical Characteristics, Stealth Mastery, Weapon Mastery (Skilled with an axe, handgun, and knife. Shown to be skilled various other weapons and equipment such as swords, shields, claws, etc. in the form of Equipment), Small Size (Type 0), Immortality (Type 4; Like all Legends, he will resurrect after a given timeframe at his base), Inorganic Physiology (Type 1), Accelerated Development, Regeneration (To an unknown extent, likely Mid-Low), Self-Sustenance (Types 1, 2, and 3), Soul Manipulation and Possession (Can transfer his soul into an opponent), Empathic and Mind Manipulation (Forces opponents to turn and attack Chucky unwillingly), Damage Reduction (Damage dealt by nearby opponents is reduced), Damage Boost (Charges a normal attack to deal increased damage), Statistics Reduction (Can decreases an opponent's physical defense and their speed), Statistics Amplification (Can increases movement speed for a short duration), Minor Instinctive Reaction and Attack (Chucky will passively and instantly attack after making a standard attack or when he is attacked. Chucky can also passively dodge attacks), Magic (Can deal magic damage against opponents), Resistance to Magic (via Magic Defense)

Attack Potency: Wall level physically (Comparable to King Kong, Mane, and Tusker, who scale to gorillas, lions, and wild boars respectively. Comparable to Legends who can use explosives and create craters), higher with abilities, Runes, and Equipment. Ignores conventional durability with some abilities

Lifting Strength: At least Class 1 (Comparable to Legends who scale to animals this strong)

Durability: Wall level physically (Can tank attacks from other Legends), higher with abilities, Runes, and Equipment

Stamina: Unknown, likely high via being a possessed doll

Intelligence: Above average (Skilled in various magics, as well as various types of weapons)

Weaknesses: He will always resurrect at his base, and will have to travel back to the given location, potentially leading to BFR.