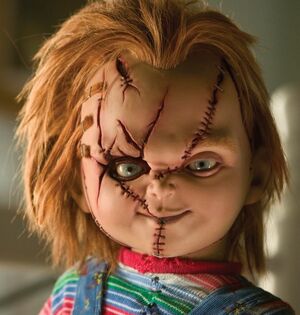 Tier: 10-B physically. At least 9-C with weapons and preparation

Powers and Abilities: Superhuman Physical Characteristics, Small Size (Type 1), Inorganic Physiology (Type 1), Stealth Mastery, Weapon Mastery, Preparation, Explosion Manipulation with a grenade, Magic (Voodoo, Electricity Manipulation and Weather Manipulation for being able to summon storm clouds/lightning bolts by saying his chant), Possession (Can move his soul into other beings and objects with his chant. His blood will possess anything it is mixed into, such as plastic, and whatever that plastic is used to make. He can possess multiple people at once as of Cult of Chucky, and will return to his core Good Guy body if a human host is killed), Soul Manipulation (As of Cult of Chucky, he has learned how to separate his soul into multiple Chucky dolls, and he can also move the souls of others into dolls and other objects)), Resurrection, Immortality (Types 2, 4, and 6; even after being nearly completely burned, having his head shot off, and being shot in the heart, Chucky still lives in the doll and will be alive if it is repaired), Body Control (Can control his headless body after being decapitated and made his severed right arm strangle a kid), Regeneration (High-Low; can reattach his limbs and even his head)

Attack Potency: Human level physically (Isn't depicted as very strong). At least Street level with weapons and preparation (Can beat adults to death with things like a yardstick, once decapitated a man with help from Tiffany, weapons are on this level)

Speed: Below Average travel speed (Due to his size), with Subsonic reactions (Dodged gunfire)

Striking Strength: Human Class (Typically can be fought off and overpowered by regular humans with moderate difficulty)

Durability: At least Street level (Can survive being stabbed, shot, and set on fire), Immortality and body control make him somewhat difficult to truly kill. Resurrection and ability to separate his soul and form more of himself make him extremely hard to permanently put down

Stamina: Superhuman (His immortality and body control allow him to continue attacking even after suffering such injuries as being set on fire and decapitated. In the first film, his headless and burnt torso continued to attack after losing an arm and a leg)

Standard Equipment: His knife, amulet, and a voodoo doll, along with a number of other weapons.

Intelligence: Above Average (Chucky is a cunning killer capable of manipulating others into unknowingly falling in line with his plans and believing him to be no more than a normal Good Guy doll. He is very capable when it comes to setting traps and ambushing opponents)

Standard Tactics: Chucky typically uses his stealth and small size to ambush his victims, before using his weapons to kill them. Alternatively, he will sneak up on them to knock them out and use his body swapping spell. Chucky usually pretends to be a normal doll until he's picked up, at which point he will pull out his knife and attack. If forced to fight in a direct battle, he typically rushes the opponent, allowing his immortality and body control to enable him to fight despite horrific injuries. He may play dead after seemingly being killed in order to take his foe by surprise after they think they're safe.

Weaknesses: If Chucky does not transfer his soul fast enough, he will be stuck as a doll. His small size and low weight make it hard for him to effectively fight others, and he is prone to arrogance. If his heart is destroyed, he will be "killed", but he'll come back just fine once repaired. The soul transfer ritual takes time and can be interrupted.

Lubdan (Leprechaun) Lubdan's profile (Speed was equalized, Chucky had all his equipment and was bloodlusted)

William Afton (Novels) (Five Nights At Freddy's) William’s Profile (William was 9-C, Speed was equalized, and both were bloodlusted)