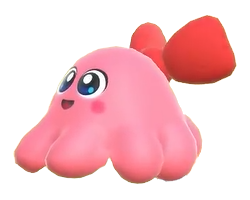 ChuChu is an octopus who is an ally and close friend to Kirby during some of his adventures. She is also implied and presumed to be Kirby's love interest along with Ribbon.

Powers and Abilities: Superhuman Physical Characteristics, Can swallow foes, Flight, Surface Scaling, Elasticity, Natural Weaponry, Body Control, Can assist Kirby with his Copy Abilities, gaining access to new powers (Which she is presumably able to use on her own like Gooey), Can shot regenerative needles (Needle), Electricity Manipulation/Energy Projection (Spark), Ice Manipulation (Ice)

Attack Potency: Multi-Solar System level (On par with other Animal Friends, knocked Gooey, the one who canonically assisted Kirby defeat 0. Appears as a cameo in an attack in Star Allies, being able to harm foes in that game)