VS Battles Wiki
Register
Don't have an account?
Sign In
Advertisement
in: Variable Tier, Tier 7, Tier 7-C,
and 40 more 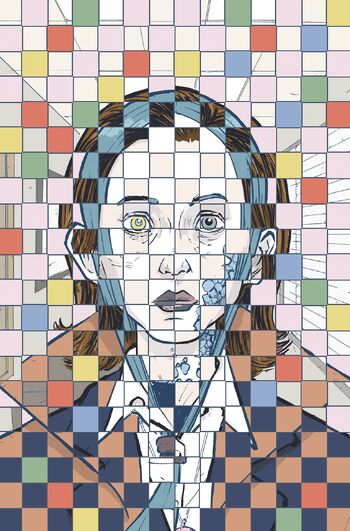 Caroline Sharp, better known by her alias, Formless Girl, is a fictional character which first debuted in 1956's "The Astounding Tales #32", conceptualized by artist George Sumner and having originally been conceived as a darker take on the superhero genre better defined as an "horror superhero", her character was later remodeled after Sumner's editors pressed him into changing her concept and execution to fit more with the "science-fiction superhero" mold, increasingly popular at the time of her creation. Regardless, the character still steared closely to her creator's original idea, her origin story being given as that of an agent pertaining to a secret governmental organization nominated Alpha-13, who, in a mention with the objective of thwarting the supervillain Madame Atom's plan of detonating a nuclear drill within a Ziggurat holding vast amounts of divine power within itself, thus taking the elemental force of an unspecified Sumerian god unto her body and becoming the most powerful being in the Universe. Attempting to deactivate Atom's drill by hand, Caroline eventually ran low on time and the drill exploded within the Ziggurat, embuing her with the powerful magic contained in the construction and drastically mutating her appearance into that of an inorganic, blue-skinned chimeric humanoid, as a result granting her the power to fully control her own atomic structure, thus turning her into the titular Formless Girl.

After her original run was cancelled in the early 1960s, the writer-artist team comprised of Fred Hand and Garry Streicher bought back the character as part of a new book called "ALPHA-13", depicting the homonymous organization, now consisting of a team of super-powered misfits, in a constant battle against Madame Atom and her plans to plunge the world into anarchy, with Caroline being referred to by the alias Chrysalis, the Eternity Girl for the first time here. Fast-forward to the future, and after multiple reboots and reimaginations of the character, Caroline, now seemingly self-aware as a character and free from the narrative, had become tired of being constantly rewritten and repurposed by her authors, seemingly escaping her story and travelling across the blank page of nothingness. As the continuity itself was being rebooted by the combined efforts of the Justice League and the Doom Patrol, Caroline integrated herself into the seemingly unchanged Earth-Prime.

Powers and Abilities: Superhuman Physical Characteristics, Immortality (Types 1, 2 and 3), 4th Wall Awareness (Became aware of her own status as a fictional character, existing as nothing but an intellectual property free to be utilized and rewritten by the writers, and gained conscience of the several reboots undergone by her story over the past decades. Can walk across the blank page itself and physically interact with the comic's panels), Enhanced Senses (Can directly see the interactions between individual atoms and particles both within herself and in the locations around her, describing everything as having no boundaries or distinction in her point of view, with "everything fading into everything"), Extrasensory Perception, Acausality (Type 1 and 4. Has seemingly broke free of the narrative itself, managing to exist upon the blank page in which the comic is drawn, and having been unaffected by the continuity being reseted after Retconn's attempts to erase it were thwarted), Cosmic Awareness, Self-Sustenance (Types 1, 2 and 3), Inorganic Physiology (Type 2), Intangibility / Incorporeality (In her most basic and primal state, she exists as nothing but a wave function, a self-perpetuating pattern of pure form and signals imprinted upon the universe, with Madame Atom stating that reality unfolds as if she simply wasn't there), Shapeshifting, Body Control (Has complete dominion over her own atomic structure and basic bodily functions, as well as her own intrinsic field in conjunction with those of other objects or people, with her influence extending even to completely metaphysical, abstract constants such as The Shining Tower. Could morph her own identity by tapping into her own basic nature as a wave function, leaving her previous self behind and becoming someone else entirely), Radiation Manipulation, Quantum Manipulation, Creation, Size Manipulation, Fusionism (Exists as nothing but a sentient intrinsic field operating and interacting with other intrinsic fields, which can be expanded and combined to other objects in order to merge with them. Was in the process of combining herself to the Shining Tower's structure, which is stated to be fully metaphysical and to span all concepts), Elemental Manipulation, Matter Manipulation, Portal Creation, True Flight, Energy Manipulation, Transmutation, Light Manipulation, Biological Manipulation, Explosion Manipulation, Reality Warping, Higher-Dimensional Manipulation, Telekinesis, Plant Manipulation (Made vines sprout out of the ground)

Attack Potency: Varies, Town level (Can cause her atoms to forcibly undergo nuclear fission in a suicidal attack, dissolving herself into a nuclear explosion capable of wiping out all of Midtown Manhattan according to the Never Man) to Universe level+ (The power wielded by Chrysalis is described as divine, and as being the greatest force in the Universe by Madame Atom, who planned to utilize it to reshape the entire world in another iteration of reality. Easily obliterated Astrolas, a semidivine mechanical being tasked with defending the Nameless Planet wherein the Shining Tower resides, and whom the Lords of Chaos and Order considered to be a fundamental cosmic force - and later effortlessly remade him after obtaining another identity. Far more powerful than Madame Atom, and alongside her managed to temporarily defeat Lord Crash, one of the Lords of Order responsible for maintaining the balance of reality itself - existing as a part of the cosmic dichotomy through which all universal drama unfolds - as well as the endless cycle of death and rebirth to which all of creation is drawn to, though their exact connection to it is left unclear. Reformed the parts of creation which she ravaged and threw into disarray while attempting to destroy it, becoming a mortal proxy for the Lords of Order to directly act upon reality). Up to Outerverse level at the height of her power (Capable of manipulating her own intrinsic field to the extent of being able to fully affect, and eventually merge with, the Shining Tower, the metaphysical fount and pillar of creation which sustains and encompasses all of space and time, existing as the axis which the eternal cycle of existence revolves around, containing all possible universes which have ever existed and will exist. The Tower has additionally been described by the Lords of Order and Chaos to be a fundamental and non-contingent aspect of creation, upholding all concepts which exist within it, including the concept of a concept.  By collapsing it, Caroline was going to obliterate absolutely everything in existence, encompassing it in boundless nothingness and leaving not even a void behind. )

Speed: Unknown, potentially Omnipresent (Capable of merging herself with structures as vast as the Shining Tower, which contains and encompasses all of space and time and reality)

Lifting Strength: Unknown, up to Immeasurable

Durability: Unknown (Incapable of permanently harming or killing herself in any way, though this is likely due to her nature as an abstract wave function, rather than her own resilience. Claimed that she was unsure if dissolving herself into a nuclear explosion would actually kill her, as opposed to simply scattering her intrinsic field across the planet/universe, leaving her as an inert observer incapable of interacting with the physical world), up to Outerverse level

Range: At least Several Kilometers, up to Universal+ with standard powers. Up to Outerversal at her height.

Weaknesses: Became extremely apathetic, depressed and suicidal over the years, actively diving into self-destructive habits and searching for ways to end her own life, even being willing to end all of existence and destroy entire cities to accomplish this. Her powers are noted to be difficult to properly maintain and control, being at risk of going haywire in stressful situations. None Notable after changing her identity and leaving her old self behind.