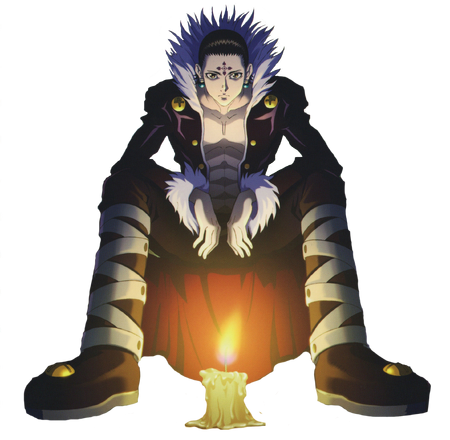 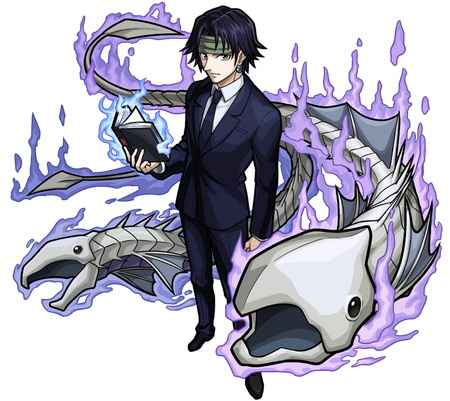 Chrollo Lucilfer (クロロ=ルシルフル, Kuroro Rushirufuru) is the leader of the Phantom Troupe, an infamous gang of thieves with class A bounties. His physical strength ranked seventh in the group. He is known to have orchestrated the Kurta Clan Massacre, which set Kurapika on a path of vengeance.

A highly intelligent and powerful man, his reputation lead to him being targeted by Hisoka Morow in his continuous search for powerful and worthy opponents to fight. He orchestrated the attack on the Southernpiece Auction in Yorknew City on September 6'th, and caused so much mayhem that it was considered to be one of the greatest heists in history and completely remapped the power structure of the mafia around the world. However, he was captured by Kurapika as revenge and his Nen was sealed off, but was released in a hostage exchange. He would later go east in search of a Nen exorcist and hired Abengane to remove Kurapika's Judgment Chain, which was successful.

After a year, he agreed to a match with Hisoka in the Heaven's Arena, and came out victorious in a fight to the death. Unbeknownst to him, Hisoka had formulated a plan to resurrect himself and murdered two valuable members of the Troupe. Enraged, Chrollo ordered Hisoka's death, and both him and the Troupe are currently searching for Hisoka on the Black Whale.

Name: Chrollo Lucilfer, 'Boss' or 'Chief' by the Phantom Troupe

Superhuman Physical Characteristics, Nen Manipulation (Specialist; His Nen type is a combination of the other five, but in a way that no normal Nen user can utilize. His talent for Nen is judged prodigious not only for his age but even by the standards of masters in the discipline. Can use all the basic and advanced techniques), Genius Intelligence, Master Hand-to-Hand Combatant (He can fight against Zeno and Silva Zoldyck and put Hisoka on the defensive), Weapon Mastery (Chrollo can kill Nen users with a pen and can wield a knife skillfully enough to tag Silva Zoldyck), Social Influencing (Chrollo is extraordinarily charismatic, and has the undying loyalty of Troupe members. Easily charmed Neon Nostrade. Is a highly skilled actor, successfully convincing the mafia that Neon had fallen unconscious for no reason), Poison Manipulation (Chrollo claims his Ben's Knife contains poison so potent that 0.1 mg is enough to paralyze a whale), Preparation (Chrollo improves drastically if he prepares to his fights, like in his battle with Hisoka), Power Absorption (Skill Hunter allows Chrollo to steal Nen abilities, while the victim is no longer able to use the stolen skill. Additionally, Double Face will enable Chrollo to use two Nen abilities at the same time as he can close a page and still utilize the said ability. However he must fulfill multiple difficult conditions making this unlikely to be used in spontaneous combat, especially against opponents of comparable or superior skill such as Hisoka or Zeno Zoldyck)

Summoning (He can conjure ghostly skeletal entities called Indoor Fish), Biological Manipulation (With Indoor Fish, victims do not bleed, feel pain, and are unable to die even with fatal wounds until the Fish goes away), Size Manipulation and Sealing (Fun Fun Cloth shrinks any object or person to a size that can easily fit the palm of one's hand), Teleportation (Teleported Nobunaga to prevent him attacking Hisoka), Mind Manipulation and Body Puppetry (Black Voice allows Chrollo to completely control any living being's mind and actions by sticking an antenna in them, while Order Stamp will enable Chrollo to control corpses), Explosion Manipulation (By marking targets with the Sun or Moon, Chrollo can create explosions, once affixed, they do not disappear even if the book is closed. It is also an example of post-mortem Nen), Duplication (Gallery Fake allows Chrollo to create a copy of any object he touches with his left hand and conjure the fake with his right hand), Shapeshifting (Convert Hand allows Chrollo to copy appearances with his left hand and make others look like him with his right hand), Clairvoyance (With Lovely Ghostwriter, Chrollo can write accurate predictions of the future in the form of poetry)

Attack Potency: Multi-City Block level+ (He is the most powerful member of the Phantom Troupe. Defeated and nearly killed Hisoka in a fight, albeit Chrollo had an overwhelming advantage. Is capable of fighting both Zeno and Silva, and stalemated Silva in the past.)

Speed: At least High Hypersonic+, likely Massively Hypersonic (Kept up with and dodged attacks from Zeno and Silva Zoldyck. His speed was equal to Hisoka's in their duel. Pakunoda states that Chrollo would have no trouble dodging an attack lasting 0.2 seconds. Chopped Neon Nostrade's neck so fast that no one but a trained assassin saw it.)

Lifting Strength: Class 100 (Ranks 7th in arm-wrestling in the Troupe. Impressive since a Specialist has the lowest affinity for Enhancer qualities. Can throw adult males several meters with one arm.)

Durability: Multi-City Block level+ (Can block attacks from Zeno Zoldyck, survived an explosion created by Silva Zoldyck, and tanked a hit from Hisoka, who is much stronger than him physically.)

Stamina: Immensely High. (Chrollo's stamina is far, far superior to those who take the Hunter Exam, which involved brutal and rigorous physical activities such as running 80 kilometers across different terrains. Was able to keep pace with Zeno and Silva, two of the deadliest assassins in the world, and fought and defeated Hisoka after an intense match.)

Intelligence: Genius. Chrollo is extremely intelligent, resourceful, and charismatic. He is a born leader, as most of the Troupe members are incredibly loyal to him and follow his orders without question. His plans usually go smoothly and have shown to be both knowledgeable and intuitive. He was able to trick the whole Yorknew City's mafia into thinking that he, along with many comrades of his, had died. He managed to predict part of the "Chain user's" strategy of vengeance, though both Kurapika and Hisoka outsmarted him. He has complete dominion over his emotions, as demonstrated when captured by Kurapika, with Melody claiming that Chrollo had no fear of his demise and that he lived alongside death every day. In the fight against the Zoldycks, he focused on stealing Zeno's ability amid combat and leaving no openings to Silva to exploit, proving himself to be an efficient multitasker, which has brought the praise of both Silva and Zeno.

Weaknesses: While using an ability, Chrollo must turn to the page with the skill on it, and the book must remain open in his right hand; this means he could only have access to one chosen ability at a time. Double Face somewhat circumvents this and allows Chrollo to use two skills at a time. To steal a Nen ability, Chrollo must meet four rigorous requirements. Indoor Fish can only be used in a sealed room. Order Stamp cannot control anything living. As of the Dark Continent arc, he has lost Clairvoyance, Body Puppetry, and Duplication due to the deaths of Neon Nostrade, Shalnark, and Kortopi. Zetsu involves keeping one's aura exclusively in the body, it makes a Nen user more vulnerable to physical, and Nen attacks, because one doesn't have any aura on the outside of one's body to protect oneself.

Nen: Chrollo's Nen Ability is called Skill Hunter (盗賊の極意スキルハンター Bandit's Secret). It allows him to steal the Hatsu of other people to use them as his own using a book known as the "Bandit's Secret." The victims can no longer use their stolen abilities. 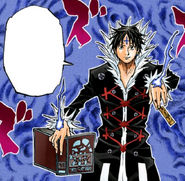 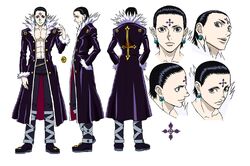 Chrollo's design in the anime 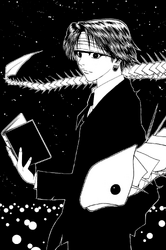 Muzan Kibutsuji (Kimetsu no Yaiba) Muzan's profile (Speed was equalized, both had full knowledge on each others abilities, battle took place in crowded park and Chrollo had prep time)