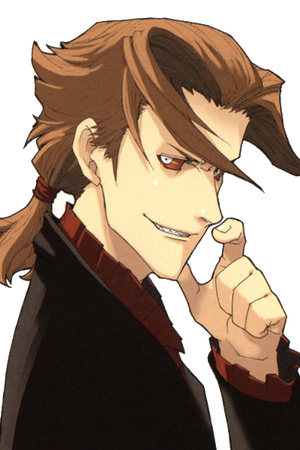 Christopher Shaldred is a homunculus created by Huey Laforet with the knowledge he stole from Szilard, and like the other homunuculi, he doesn't age.

Attack Potency: Small Building level via power scaling to Ladd Russo (Christopher is one of the most powerful fighters in the series, being the only person in the history of Baccano to be able to land a single strike on a very casual Claire Stanfield. Claire himself vouches for Christopher's abilities stating that he was the third most powerful person he knows, the first being Claire himself and the second being the Former Felix Walken.)

Speed: At least Superhuman travel speed; with at least Supersonic reactions and Combat speed (Managed to land a strike on a very casual Claire.)

Striking Strength: Small Building Class (One of the top fighters of the series.)

Standard Equipment: His weapons of choice are a pair of modified apache revolvers that he can make appear like magic.

Weaknesses: Due to being an incomplete Homunculus, he cannot regenerate like other immortals. Christopher has been in shock since his defeat by the hands of Claire and has been left unable to kill since.

NOTE: Big thanks to the wiki for letting me use their information.