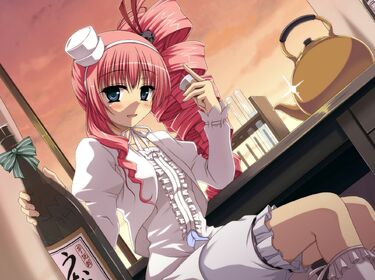 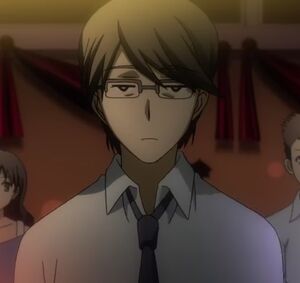 Chris is a supporting character and antagonist in KoreZombie. She's an inhabitant of the magical land of Virie, and said to be the strongest masou shoujo to exist. She served as the teacher of Ariel in the past. Over a century ago, she participated in the coup d'état orchestrated by Ariel against the Queen of Virie, Lilia Lilith, alongside their friend Akuma Danshaku. When the coup failed, Ariel used Chris as a scapegoat and framed her as the ringleader; as a result, Ariel escaped punishment by making herself seems like an innocent bystander, while Chris received Lilia's strongest curse, sealing her powers and emotions, and turning her into an unattractive middle-aged man stuck on Earth, Takeshi Kurisu. From this event, she's desires revenge against Ariel, and her time stuck in another form has made her desire chaos. As Takeshi, she's the homeroom teacher of Ayumu Aikawa at his high school. With help from her friend Naegleria, she became able to momentarily turn into her original form when she's drunk.

Stamina: At least on par with Ariel. As the strongest masou shoujo, she's never been shown to be even close to being out of breath. Makes every fight she partakes into feel like a walk

Intelligence: While a bit airheaded, Chris is particularly shrewd and capable, with equal smartness to her student, Ariel. Has enough experience to easily read her opponent's moves and correctly guess intentions with her sharp intuition

Weaknesses: Tickling her makes her unable to fight for a bit

Clones: Chris can create dozens upon dozens of copies all at once. She mainly uses her clones by stacking them up on her own body, and her tactic is making the opponent believe their attacks are ineffective by having them unknowingly strike a clone, then upon seeing Chris (the real one) isn't hurt at all, having them try differing approaches and attacks as the previous one "failed". This effectively seals the opponent's powers and attacks one by one and making them discouraged, while making her seem invincible. Furthermore, as she stacks several clones on top of herself, creates new ones when some are destroyed, and cannot be hit without going through all the superposed clones first, no matter how much her doubles are taken down, the real body will rarely ever be reached.

Retrieved from "https://vsbattles.fandom.com/wiki/Chris_(KoreZombie)?oldid=6152139"
Community content is available under CC-BY-SA unless otherwise noted.