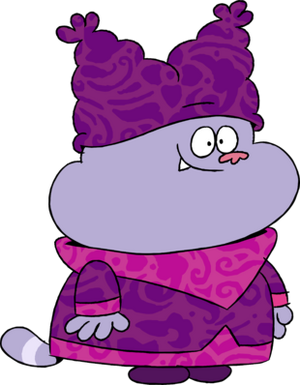 Chowder is the titular protagonist of the Cartoon Network series, Chowder. He is the young apprentice of Mung Daal, and usually gets himself into misadventures due to his love of cooking and his insatiable desire to eat.

Powers and Abilities: Superhuman Physical Characteristics, Toon Force, Regeneration (Mid-High. Can regenerate from being turned to dust and a pile of liquid), Immortality (Types 3 & 8. Reliant on the capability of his creators to animate him; Due to lack of money, his show lost all its animation, reducing the characters into their real life actors voicing them, all of whom eventually & relatively quickly gathered enough money to return the animation. This applies to the show as opposed to Chowder himself), BFR (His stomach is a bottomless void that generally can't be escaped from unless Chowder decides to spit out the target), Teleportation (Has used screen transitions to go to faraway distances very quickly, as seen in a few episodes like Chowder and Mr. Fugu), Reality Warping, Plot Manipulation (Deleted Truffles for an episode by claiming she’s not in it, and she wasn't seen for the rest of the episode afterwards. Rewrote an episode into something else. Ate an episode. Can easily exit his cartoon. Turned the entire show into Cooking Talk with Chowder after eating Brain Grub), Time Manipulation (Rewinded and fast-forwarded an episode, can flip scenes to pass time. Reset an episode twice in a single episode length), Time Stop (Paused an episode), Time Travel (As seen in the episode Won Ton Bombs. Near the end of Chowder Grows Up, his younger self traveled to the future), Non-Physical Interaction (Can touch Kimchi), Invisibility (turned himself invisible so he could hide from Panini in The Bruised Bluenana), Self-Age Manipulation (Turned himself into a grown man at will, and then back to his normal age seconds later), Air Manipulation and Flight via The Tootin' Fruit (Allows him to fly and deliver farts strong enough to create winds that can break down walls and throw people several meters away), Fire Manipulation via eating hot peppers, Poison Manipulation via Burple Nurples (The Burple Nurples are notorious for being very poisonous, to the point where its sheer scent killed a flower and it had potential to spread poison all across Marzipan City), Sleep Manipulation (Can make blormed milk, which causes anybody who drinks it to fall into a deep sleep), Creation with Finger Paints, Duplication, Body Control, Elasticity (Can stretch his arms hundreds of feet away, although this gives him immense pain), Breaking the Fourth Wall (Is fully aware that he's a fictional character in a cartoon. Also fully aware of the audience and the real world), Spatial Manipulation, Resistance to Possession (Drove a ghost poultery out of his body), Time Stop (Can move around while time is frozen), Extreme Heat (Can walk across flaming hot coals with little injury) and Ice Manipulation (After being frozen in The Brain Freeze, his brain created a mechanism to thaw him out and warm him up)

Speed: At least Hypersonic+, likely higher (Can keep up with Schnitzel, who can climb a giant this big in this timeframe).

Stamina: Varies from Low to Extremely High. Portrayed as fat and lazy, but was able to sing for 20 years straight without stopping in Chowder Grows Up. Can complete an incredibly difficult obstacle course of a sport resembling baseball and other feats of the sort when motivated. In The Sleep Eater, he ate all the food in Mung's catering company in one night.

Weaknesses: He is very gullible, clumsy and can be cowardly. Has an immense appetite, and will do anything for food.