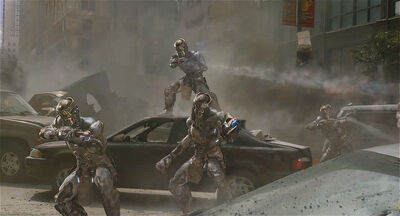 The Chitauri are a race of cybernetically enhanced aliens who serve under the leadership of Thanos, who gave them over to Loki for use in his invasion of Earth in an attempt to acquire the Tesseract. Though they successfully invaded the planet through a wormhole created by the Tesseract, they were ultimately defeated by the Avengers.

Attack Potency: Wall level normally (Can damage cars by jumping on them). Building level with weapons (Hurt Captain America with their blasts) | Small Building level (Destroyed cars and tore through streets, and caused an explosion that engulfed a rooftop) | Large Building level (Tore through multiple buildings with ease, was too strong for Mark 6 Iron Man to fight directly) | Unknown

Weaknesses: If the Command Ship is destroyed, all the soldiers and Leviathans die.  The Leviathans are much weaker in places not covered by armor.