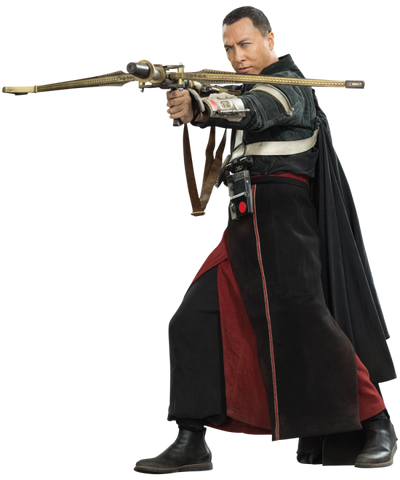 Chirrut Îmwe was a human male monk of the religious order known as the Guardians of the Whills on Jedha, a moon of the planet NaJedha, and partner of Baze Malbus. Unlike his partner, who retired from the order and became a mercenary after the fall of the Jedi Order and rise of the Galactic Empire, Chirrut remained faithful to the will of the Force and the Jedi way. In the year 0 BBY, he joined a special strike team of the Rebel Alliance led by Jyn Erso and Cassian Andor whose goal was to infiltrate an imperial base on the planet Scarif and retrieve the structural plans for the Death Star.

Tier: 9-B physically. At least High 8-C with Lightbow

Age: Unknown but likely in his 50s (same age group as Baze Malbus)

Classification: Human, Guardian of the Whills, Member of Saw Gerrera's Partisans (formerly), Member of the Alliance to Restore the Republic

Powers and Abilities: Superhuman Physical Characteristics, Enhanced Senses (Can sense the exact positions of people and vehicles based on vibrations he picks up in the ground, also has outstanding hearing well beyond that of the typical human), can sense emotions such as killing intent (sensed the Dark Side aura surrounding Cassian Andor caused by his intent to assassinate Galen Erso), master staff wielder and a marksman, master hand-to-hand combatant

Attack Potency: Wall level physically (Only slightly weaker than his partner overall. Should not be weaker than Saw Gerrera, who is able to knock out a Death Trooper with a single blow). At least Large Building level with Lightbow (Bowcasters/Lightbows are vastly more powerful than standard military issue blaster rifles and heavy blaster rifles/cannons. A single well placed shot to the Solar Array Support Frame of a TIE Fighter crippled it)

Speed: Peak Human (Can attack at such speed that an entire squad of trained Stormtroopers are unable to bring their rifles/pistols to bear in time to fire on him) with likely Superhuman reflexes (Has reacted to small arms fire from shooters just a meter or two away from him)

Striking Strength: Wall Class (Even a casual blow from him possess power enough to completely shatter the helmet of a Stromtrooper. Should not be weaker than Saw Gerrera and overall only slightly weaker than Baze Malbus)

Range: Extended human melee range with his staff, several dozen to possibly hundreds of meters with his Lightbow (Managed to hit a TIE fighter in flight)

Intelligence: High. Skilled fighter and marksman, skilled infiltrator, highly capable soldier overall. Is also quite wise and has a decent grasp of what makes people tick (as shown when he read Cassian Andor).

Weaknesses: He is blind (though this doesn't appear to hinder his overall combative viability too much).

Retrieved from "https://vsbattles.fandom.com/wiki/Chirrut_%C3%8Emwe?oldid=6615827"
Community content is available under CC-BY-SA unless otherwise noted.