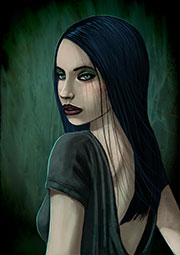 China Sorrows is an extremely powerful sorcerer, collector of magical objects and tomes, and information broker. She was partly responsible for the death of Skulduggery Pleasant's family out of jealousy of his wife, though Skulduggery did not learn this for a long time. After the battle of Roarhaven she declared herself Grand Mage of Ireland.

Age: Unknown (Only she knows her exact age but she's implied to be around the same age as Skulduggery, over 400)

Powers and Abilities: Symbol Magic, Empathic Manipulation (Anyone who sees her instantly falls in love with her, regardless of gender), Regeneration (Low, able to regenerate bullet wounds, albeit with some time and great magical cost), Longevity (Magic greatly slows the aging process), Minor Telekinesis, Energy Manipulation (Can throw shockwaves of energy, can project a focused beam of energy, can create daggers comprised of energy, can create barriers of energy), Light Manipulation, Attack Reflection (with prep, can create a prison of symbols that reflects an opponent's magic back at them), Statistics Amplification (can increase her strength and speed by activating the invisible symbols tattooed on her body), Pain Manipulation and Death Manipulation (By touching someone with a symbol on her palm she can painfully kill them near instantly), Mind Manipulation (Can control people through their given name), Heat Manipulation (Can heat her own body to temperatures high enough to kill physicaly comparable people in contact with her in a suicide attack), Resistance to Madness Manipulation (even having a small amount of magic can drive mortals completely insane, but sorcerers can wield their magic without issue)

Attack Potency: Small Room level (Fought Baron Vengeous armed with Lord Vile's armor, comparable to Skulduggery), possibly higher (battled and defeated Ravel when he had been boosted by the Accelerator), can ignore durability with Death Manipulation.