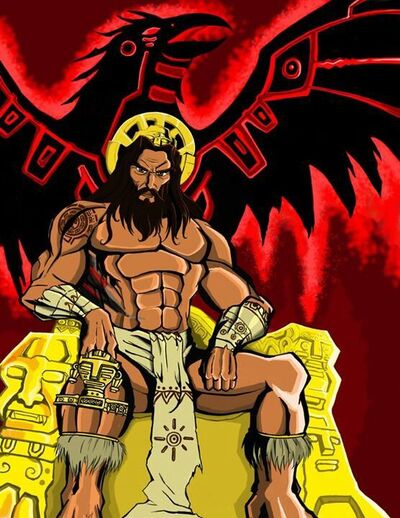 Also known as Chimichagua, creator god or supreme force. Before there was anything in this world, when darkness filled everything like an eternal night, there was only one great thing that had no form or face. But inside it possessed the light, they called it Chiminigagua.

Chiminigagua hurt his gigantic belly and a light beam began to appear from his wound. From this first light life arose.

Then he created large black birds and flew them to spill their breath on the tops. Slight breaths of luminous and transparent air flowed from their mouths, which made the Earth look clear and illuminated.

Attack Potency: Universe level+ (From him comes everything created, including light, space, and time )

Intelligence: Omniscient. He knows literally everything inside his mythology.

Retrieved from "https://vsbattles.fandom.com/wiki/Chiminigagua_(Mythology)?oldid=5703936"
Community content is available under CC-BY-SA unless otherwise noted.