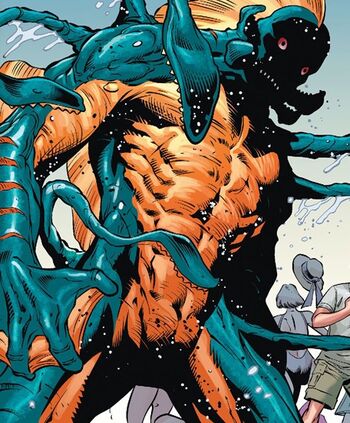 Coombs used to be a diver working for the Triton Base. He was mauled by sharks during the line of duty, and although he was saved by Aquaman, he wouldn't survive for long due to severe brain loss. He was a man with nothing to lose, as he had no relatives and lived for his work. As such, experimental measures were autorized in order to keep him alive.

Doctor Edrid Orson replaced the damaged parts from his brain with brain tissue from Karaqan, a hulking leviathan who used to protect Atlantis in ancient times. Orson also infused Coombs with cells from several other marine life so he could create a living weapon, a true Chimera. However, he killed Orson before he could install a command unit in his brain, causing him to escape from the lab and go rampage in the city of Maine.

Classification: Diver turned into a monster

Speed: At least FTL Reaction and Combat Speed (Can keep up with Aquaman)

Lifting Strength: Class G (Should be comparable to Aquaman)

Stamina: Very high (Fought with Aquaman for an extended period of time, both in and outside of water)

Intelligence: At least Average (Chimera is a versatile fighter and capable of speech. While in Maine, he masqueraded himself as a human while trying to pick up mental signals from Aquaman)

Retrieved from "https://vsbattles.fandom.com/wiki/Chimera_(Coombs)_(Post-Flashpoint)?oldid=5988120"
Community content is available under CC-BY-SA unless otherwise noted.