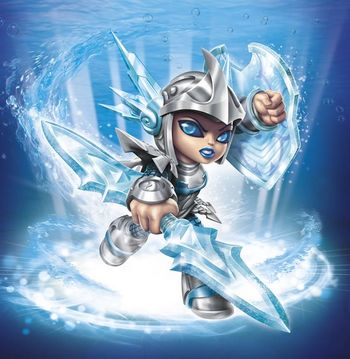 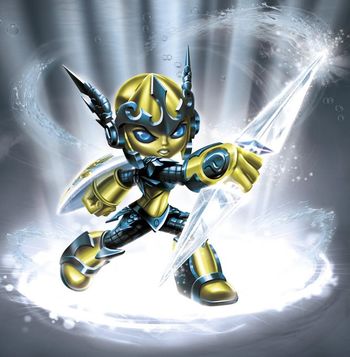 Chill was the sworn guardian and personal protector of the Snow Queen. As captain of the queen's guard, her many heroic deeds earned her the respect of the entire ice kingdom. But when the Cyclops army began to expand their empire into the northern realms, the Snow Queen was taken prisoner during her watch and Chill has never forgiven herself for letting it happen. Ashamed and embarrassed, she left the Ice Kingdom behind and sworn never to return until she could reclaim her honor. Now as a member of the Skylanders, she remains courageous and strong, while always on the lookout for her lost queen.

Powers and Abilities: Superhuman Physical Characteristics, Skilled with her javelin, Ice Manipulation (Can encase enemies in ice, and can make ice walls), Summoning, Animal Manipulation (Can summon orcas and narwhals to attack her opponents), Transmutation (Her javelin can change into three ice spears), Explosion Manipulation (Her ice walls can explode)

Attack Potency: City level (Comparable to other Skylanders such as Sonic Boom, who can dislodge mountains with her roars, and Fist Bump, who can cause magnitude 8 earthquakes. Can harm skylanders like Eruptor and Hot Dog who survived at the epicenter of a volcanic eruption ) | At least City level (Stronger than Base form)

Speed: Massively Hypersonic+ (Comparable to characters such as Lightning Rod, Thunderbolt, High-Volt, Zap, and Punk Shock, who all use natural lightning and electricity in combat), likely Relativistic+ (Shouldn't be much slower than characters such as Whirlwind, Knight Light, Astroblast, and Aurora, who all attack with real light projectiles and can move at the speed of light in short bursts)

Durability: City level (Comparable to Hot Dog and Eruptor, who both tanked the eruption of a volcano with no damage), possibly higher (Imperial Armor makes her harder to damage)

Ice Wall: Summons a wall of ice blocks. Can also use this for protection or to knock back enemies.

Cold Front: Keeps the shield raised and block attacks from the front.

Call The Narwhal!: Charges and summons a narwhal friend!

Orcastration!: Mini orcas appear inside the ice wall, then Chill shatters the wall and launch orcas.

Retrieved from "https://vsbattles.fandom.com/wiki/Chill?oldid=4604682"
Community content is available under CC-BY-SA unless otherwise noted.