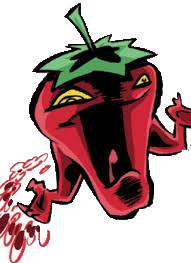 One of the members of the Brotherhood of Evil Produce. Disagrees with Romaine Gladiator, but hates Agent Kosher, even more, so he reluctantly follows him alongside his comrade the Phantom Carrot to defeat Agent Kosher.

Intelligence: Average (Less than Magic Pickle and Romaine Gladiator, but not incompetent)

Weaknesses: Possibly still edible by stronger than 9-B opponents.

Retrieved from "https://vsbattles.fandom.com/wiki/Chili_Chili_Bang_Bang?oldid=6113817"
Community content is available under CC-BY-SA unless otherwise noted.