The Children of the Forest are a mysterious non-human race that originally inhabited the continent of Westeros during the Dawn Age long before the arrival of the First Men thousands of years ago. The children initially welcomed the newcomers, but they disliked the First Men's harvesting of trees from forests. Fearing that the children used heart trees for spying, the First Men burned and cut down the great weirwoods as they came, leading to war between the two races.

Tier: 10-C, higher with weapons. 9-B with magic, possibly 6-B magic with preparation

Name: The Children of the Forest, Woh Dak Nag Gram, Those Who Sing The Song Of Earth

Age: Varies, can live for centuries

Classification: Children of the Forest

Attack Potency: Below Average Human level (Physically comparable to human children), higher with weapons (Capable of fighting wights). Wall level with magic (Fireballs are easily capable of obliterating multiple wights), possibly Country level magic with preparation (According to legend, can summon a highly destructive catastrophe called The Hammer of the Waters, which flooded The Neck, a massive peninsula situated between and separating The North and The Riverlands, turning the entirety of it into swampland, and broke the Arm of Dorne, a massive land bridge connecting Westeros and Essos)

Intelligence: Though less technologically advanced than humans, they have demonstrated mostly superior knowledge of magic. Should have vast knowledge of various events via heart trees, which they can link to telepathically.

Weaknesses: The Children were technologically primitive compared to the First Men, apparently being stuck in a stone age. Their fireballs require ammunition and their magic can be prone to backfiring, as alluded to in the creation myth of the neck, where their original intent was to separate The North from the rest of Westeros. 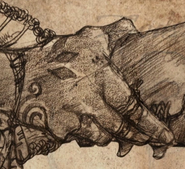 Retrieved from "https://vsbattles.fandom.com/wiki/Children_of_the_Forest?oldid=5209867"
Community content is available under CC-BY-SA unless otherwise noted.