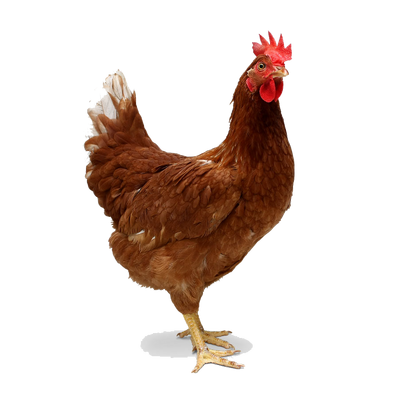 The Chicken is an incredibly important domesticated bird and one of the few animals much more numerous than humans, at over 24 billion.

Chickens are birds that originated from Southeast Asia, East Asia and South Asia, they come from the original red junglefowl. They were first domesticated 7,000 years ago possibly by China or the lost Harappan Civilization.

Powers and Abilities: Small Size (Type 1), Limited Flight (The Red Jungle Fowl can somewhat still fly, some chickens can also do this to a degree, but not at the same level), Enhanced Senses

Attack Potency: Below Average Human (Very weak and gets killed by most mammals, but can kill crows, kill mice and fight off a goose)

Striking Strength: Below Average Human (Can kill mice and other small birds)

Durability: Below Average Human (Can get easily killed by Domestic Cats and small dogs, but can fight with some birds and kill them)

Weaknesses: Their bones are very weak and they are slow 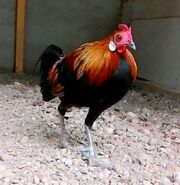 The original chicken, the red junglefowl