VS Battles Wiki
Register
Don't have an account?
Sign In
Advertisement
in: Characters, Female Characters, Good Characters,
and 30 more 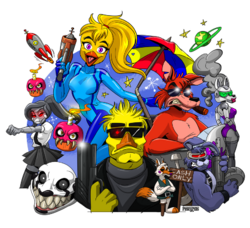 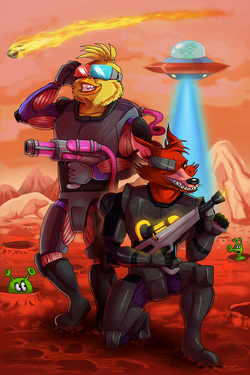 Chica is a member of the Faz-Squad space warriors. While Freddy was on a seven month mission, she was stationed at the Galactic Factory. Shortly after, she was brainwashed by LolzHax and used to create a series of monsters, including the cloning of her brain to create the Chica Defense Network.

Powers and Abilities: Self-Sustenance (Type 1) (Doesn't wear a helmet when wandering in space or underwater), Genius Intelligence, Acrobatics (Can jump several meters vertically, Can roll several meters on any surface), Non-Physical Interaction (Can kill ghosts, intangible beings, and holograms), Intangibility (Projectiles can travel through walls), Organic Manipulation (Can lob cupcakes at a high rate), Supernatural Luck (Can upgrade her luck at getting better item drops, Balloon Boy Special Power provides a small boost), Healing via Pizza and Golden Cupcake Special Power, Invulnerability and Summoning (Shield makes her temporarily invincible and summons two meteors that rapidly circle around her), Black Hole Creation via Black Hole Launcher, Summoning and Danmaku via Meteor Rain (Summons a large number of meteors across the entire screen), Electricity Manipulation and Explosion Manipulation via Shock Strike (Upon being hit, summons lightning across the stage, dealing massive damage to all nearby enemies), Energy Projection via Laser Slide! and Freddy Plane Special Power, Disease Manipulation via Amoeba Blaster, Statistics Amplification (Reaper Special Power provides a small boost to crit chance), Resistance to Heat Manipulation (Can withstand the cold of space while not wearing proper clothing)

Stamina: Large Building level (Should compare to those he fights, Can take hits from Sockpuppet and Mariominous, who may make up the Theoretical Giant Puppet)

Intelligence: At least Genius (Is the team's highest level tech-expert, Created most of the Faz-Squad's robotics and might have helped in creating LOLZHAX)