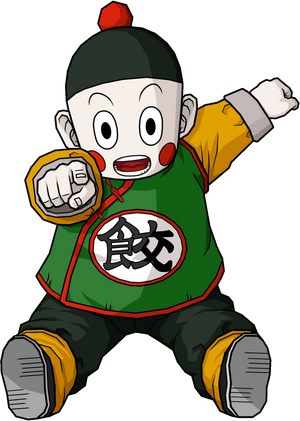 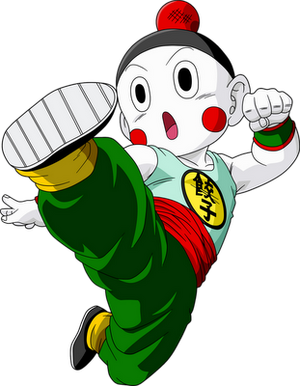 Chiaotzu (餃子, Chaozu) is a white-skinned, red-cheeked little human who appears in the Dragon Ball manga, and in the anime Dragon Ball and Dragon Ball Z, also making short cameos in Dragon Ball Super and Dragon Ball GT. He is the constant companion to Tien Shinhan, his best friend, and along with Tien, was one of Master Shen's students.

Age: 42 during the Universe 6 Saga

Intelligence: A former student of the Master Shen, and is a master of various martial arts techniques and skills. Has years of experience fighting both powerful and diverse enemies whom have various abilities. Is a combat/tactical genius for the most part. However, he appears to perform very poorly on an academic scale, as he is unable to solve simple math equations.

Weaknesses: He cannot survive in the vacuum of space and does not know math.

Chiaotzu in Dragon Ball Super.
Add a photo to this gallery