Chesnaught is a Grass/Fighting-type Pokémon from the Kalos region, introduced in Generation VI.

Gender: Can be male or female, most are male.

Attack Potency: At least Mountain level+ (Should be comparable to other starters)

Durability: At least Mountain level+ (Comparable to other starters)

Notable Attacks/Techniques: For a list of all moves Chesnaught can learn naturally, see here.= 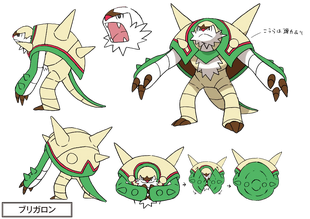