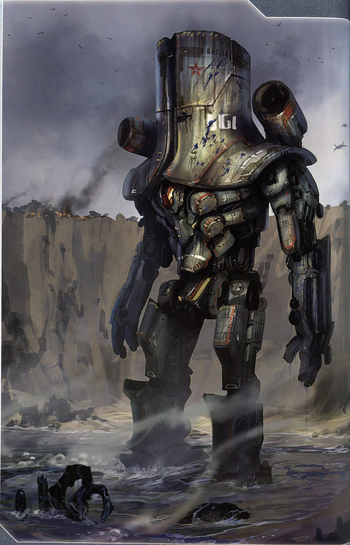 Cherno Alpha (Черно Альфа, Cherniy Alfa) is a Jaeger featured in Pacific Rim. It was piloted by husband and wife duo Sasha and Alexis Kaidonovsky and was the oldest Jaeger in operation at the time of its destruction.

Powers and Abilities: Superhuman Physical Characteristics, and Limited Electricity Manipulation (It can form electric arc impulses to power its punches).

Speed: At most Subsonic (It is the largest and slowest Jaeger, roughly comparable to Gipsy Danger)

Stamina: Unknown, runs on a nuclear reactor and is dependent upon its two pilots to function.

Intelligence: Its two pilots are of at least Average intelligence.

Weaknesses: The pilot cockpit, if destroyed, will disable the Jaeger. Cherno Alpha is also quite slow and vulnerable to electro-magnetic pulses (EMPs).

Note: Cherno Alpha has a third weapon called Incinerator Turbines, however they are never used in the film.