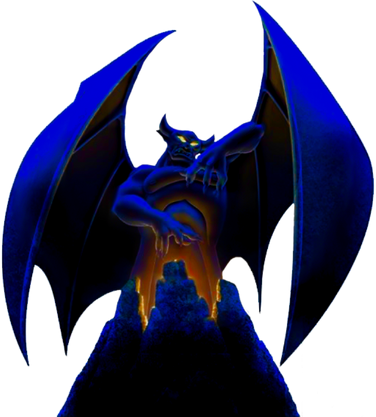 Chernabog is a demon featured in the "Night on Bald Mountain/Ave Maria" segment of the 1940 Disney animated feature film Fantasia. He is based on the God of the Night in Slavic mythology. At Walpurgis Night (the Witches' Sabbath), he emerges from the peak of Bald Mountain (in reality Mount Triglav in Slovenia) to summon all of his minions, who dance furiously as he throws them into the mountain's fiery pit.

He has been praised as Disney's best representation of pure evil, and as animator Vladimir Tytla's greatest triumph. As a very "raw" representation of evil, he, in his original appearance, is not placed in the context of any real story, and he and his minions' actions are not committed in pursuit of any discernible goal other than general havoc–wreaking and tyranny on all. Some other media has attempted to give his character more concrete context.

He is also a primary member of the Disney Villains franchise and has acted as its leader.

Tier: Unknown. At least 8-C, possibly 8-B by virtue of theoretical size

Name: Chernabog, Satan (according to both Deems Taylor and Walt Disney), The Devil

Powers and Abilities: Superhuman Physical Characteristics, Immortality, Large Size (Type 1), Hellfire Manipulation, Dark Magic, Reality Warping, Necromancy, Summoning (Can summon dark creatures like witches, demons, Harpies and ghosts), Darkness Manipulation, Immunity to Fire Manipulation (Covered himself in Hellfire near the end of Night on Bald Mountain), Soul Manipulation (Can conjure, control and transform the souls of the damned and even bring them to life only to kill them again shortly after), Non-Physical Interaction (Can grab and affect soul and incorporeal beings), Illusion Creation (Created illusions of dancing figures within Hellfire), Portal Creation (Opened a portal leading to Hell in which he threw the souls he invoked), likely others

Attack Potency: Unknown (Chernabog is constantly described as the most absolute embodiment of pure evil in Disney's Franchise and is considered to be the leader of the Disney Villains. Officially described by both Walt Disney and Deems Taylor as the representation of Satan in Disney). At least Building level+, possibly City Block level by virtue of theoretical size.

Speed: Unknown, mainly due to the fact that Chernabog is stationary (Chernabog resides at the top of the Bald Mountain). Theoretical Subsonic+ travel speed with Supersonic combat speed and reactions.

Lifting Strength: At least Class M due to theoretical size (He was large enough that, when he closed his wings, he veritably became the peak of Bald Mountain itself)

Range: Unknown. At least kilometers with his powers (Was able to cast a dark shadow over the village overlooked by the Bald Mountain).

Intelligence: Unknown (Being a representation of pure evil, Chernabog does not possess a dominant personality like other Disney villains even if most material outside of Fantasia depicts him as a ruthless monster, feared by all who encounter him. Some of his appearances also show him to be somewhat comedic, as seen in The Wonderful World of Disney and House of Mouse.)

Weaknesses: Sacred bells and light (especially sunlight). Please note that: although church bells and sunlight can pain and confine him, light and sacred bells can only force him and his minions back into hiding until night comes again.