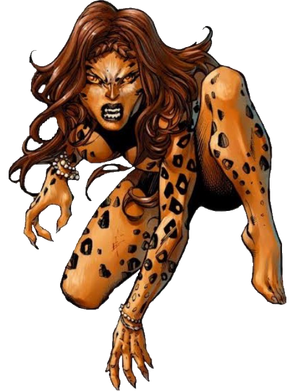 Dr. Barbara Minerva, better known as Cheetah, is a British archaeologist who has become empowered by the plant god Urzkartaga. She's a frequent enemy of Wonder Woman.

Speed: Massively FTL+ (Stated to be faster than Wonder Woman. Trained by Hunter Zolomon to be faster, and can keep up with the Flash)

Intelligence: Genius. Being a professional anthropologist and archaeologist, Barbara taught an archeology class at a university and obtained two PhDs at the age of 26. She can speak 8 languages (including English and Greek) fluently and near-fluently in an additional seven. Alongside being a skilled leader and cunning strategist, Barbara's also proven to be a capable tactician and organizer, having led her own sect of The Secret Society while concocting the plan which conceived Genocide.

Weaknesses: Barbara formerly had a limp leg in human form, needing to use a walking stick to balance. | None notable

Retrieved from "https://vsbattles.fandom.com/wiki/Cheetah_(Barbara_Minerva)_(Post-Crisis)?oldid=5188746"
Community content is available under CC-BY-SA unless otherwise noted.