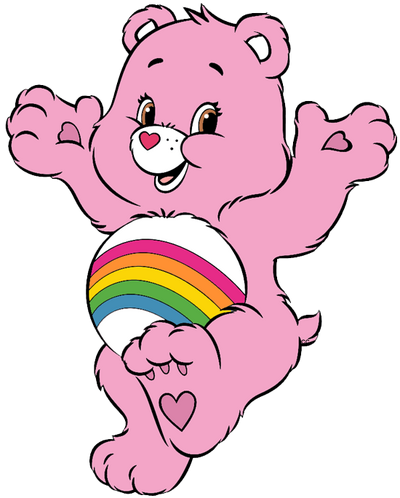 Cheer Bear is one of the ten original Care Bears who first debuted as a character on American Greetings cards in 1982. True to her name, Cheer specializes in lifting people's spirits whenever they're feeling down. Just about the only time one will find her feeling down is when there's someone who seems like they are nigh-impossible to encourage. However, this only ever leads Cheer to try harder. She constantly surprises those who doubt her capabilities with how multi-talented she truly is.

Powers and Abilities: Superhuman Physical Characteristics, Vehicular Mastery, Aura, Enhanced Senses (Able to hear cries of distress on Earth even while up in Care-a-lot or the Forest), Extrasensory Perception (The symbols on their stomachs flash whenever there is danger or someone struggling with caring nearby), Flight (With a cloud car), Empathic Manipulation, Telekinesis, Power Nullification, Purification (Types 1, 2, and 3), Light Manipulation (All Care Bears and Care Bear Cousins are able to create light and hard light constructs), Energy Projection, Body Puppetry, Morality Manipulation, Teleportation, BFR (All Care Bears and Care Bear Cousins have the ability to send others to Care-a-lot or the Forest of Feelings), Non-Physical Interaction (The Care Bear Stare has harmed No Heart's shadows, the Spirit, and the Spell), Cloud Manipulation, Creation, Homing Attack, Cloth Manipulation, Resistance to Willpower Manipulation (Members of the Care Bear family were able to withstand exposure to the rainbow crystal for far longer than any humans could before succumbing to its effects), Madness Manipulation (Type 2, the Spirit was unable to turn anyone within the Care Bears' vicinity uncaring or crazy), Chaos Manipulation (Unaffected by Dark Heart's passive chaos creation)

Speed: Massively Hypersonic+ (Should be comparable to Grumpy Bear)

Durability: At least Multi-City Block level to Large Town level+ (Should be comparable to Grumpy Bear and Swift Heart, who could tank the Care Bear Stare with little issue), possibly Mountain level (Endured a swipe from the Spirit's tendrils)

Intelligence: High (Cheer has proven herself to be a very fast learner and thinker, making her quite a valuable ally to have in intense situations. She also has mastered the Care Bear Stare and other abilities granted her by her belly symbol-- to the point where she can use them creatively and at an instant's notice. She is talented in a variety of other areas, including piloting, basket weaving, skiing, encouraging her friends when they feel down, and so on)

Weaknesses: Optimistic to a fault.