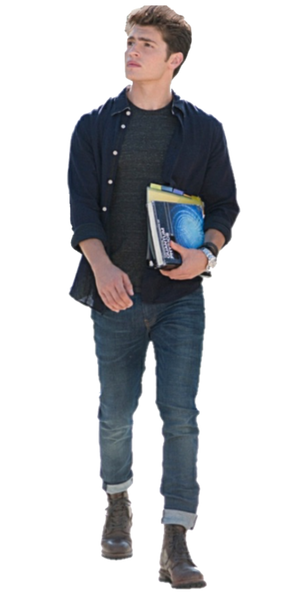 Chase Stein is a former player of the Atlas Academy lacrosse team and the son of Victor and Janet Stein. Upon reuniting with his childhood friends, they discovered that their parents used PRIDE to cover up ceremonial sacrifices of the Church of Gibborim. Interested in technology and engineering, Stein created the custom made gauntlets Fistigons. He teamed up with his friends and formed the Runaways. Having been framed for Destiny Gonzalez's murder, and with no other choice, they were forced to run.

Attack Potency: Athlete level (Can break a rib in a fight, is a trained athelete. Fistigons can send back a fully grown man) | Athlete level, Street level with lasers (Cut through an organic spaceship)

Lifting Strength: At least Above Average Human (Does weightlifting)

Range: Standard melee range. Tens of meters with the Fistigons

Intelligence: Gifted (Designed the Fistigons, though needed his father's help in creating a working model.)

Key: Before Upgrade | After Upgrade

Retrieved from "https://vsbattles.fandom.com/wiki/Chase_Stein_(Marvel_Cinematic_Universe)?oldid=4557116"
Community content is available under CC-BY-SA unless otherwise noted.