VS Battles Wiki
Register
Don't have an account?
Sign In
in: Wonderful World, Female Characters, Sword Users,
and 12 more 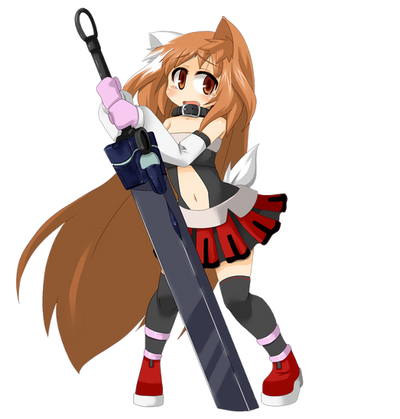 Chartette is a playable character of Wonderful World. She is a girl from sub-nationalities, Lyptus. The magician Ardore has been assigned to a troop, livestock troop, to try to use subordinates with excellent physical ability for military purposes. Chartette is attached with a collar that carved a special mark called submissive mark, and if she disobeys orders, she will suffer unimaginable pain. Currently, they are ordered to reconnaissance nationwide and are traveling around the country. Personality is temperate, but there is behavioral power, it is solid. There is a twin sister, and she is always being swayed by her broken sister. With the magical power of the earth and excellent hand strength.

Attack Potency: Small Town level (According to these calcs)

Speed: Massively Hypersonic (Can go toe to toe with herself according to this calc. Her Wedge is also of similar speeds in terms of its swing.)

Lifting Strength: Athletic Human level (Her Sword, which its mass is measured in the same calc as before is easily heavier than Heathrod, who is only 125kg in weight alone.)

Durability: Possibly Small Town level (According to this calc, Chartette's swing alone should be capable of this.)

Standard Equipment: Wedge, which is a giant sword wield by the now extinct species of Giants that once wielded this weapon. It is capable of immobilizing opponents just by piercing them. It is not possible for ordinary humans to even lift this weapon, so Chartette wielding, and using this weapon, even at approx. 7 yrs. old is a grand feat.

Intelligence: Above Average, but nonetheless, capable of what real world dogs can do.

Weaknesses: Crybaby, Heavily dependant on her Twin Sister Claudette, Is restricted by her Collar (Which shows ownership of Ardore.), and her sword's heavy weight prevents Airdash, and Double/Triple/High Jumps. Electricity Manipulation (Something Duna can do.), Liz (Who hates anything Dog.).

Feats: Can lift her Wedge with relative ease (And with very little muscle mass...) at age 7. This did not slow her down any quicker ten years later. Terra Break is the only attack in the verse to date that has a Meteor Effect that can blow up the arena. It works by slamming the Wedge to the ground, and the ground below lifts the loose crust, then disintegrates the rest of the ground. This only works this way if the opponent is Idle, and doesn't recover in time as the attack occurs...