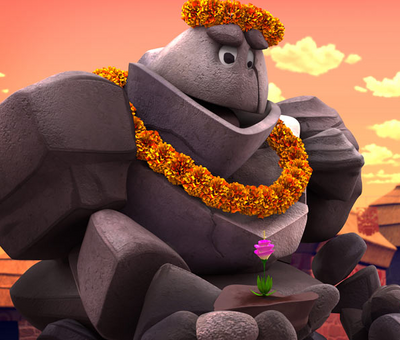 Charoca is a character in the Disney channel show Elena of Avalar. He is a magical rock "monster" who lives atop of Mt. Fuego with his rock friends.

Attack Potency: At least Small Building level (Scaling off of his durability), possibly Town level (Shook entire mountains with his rage) to City level (His eruptions were said to be able to destroy all of Avalor)

Lifting Strength: At least Superhuman (Should be superior to Gabe who could lift large rocks without much issue)

Durability: Small Building level (Caused a shockwave of this size when he jumped off of the mountain and wasn't injured by a large flow of lava)

Intelligence: Relatively high, though is a bit emotionally unstable.

Retrieved from "https://vsbattles.fandom.com/wiki/Charoca?oldid=4839222"
Community content is available under CC-BY-SA unless otherwise noted.